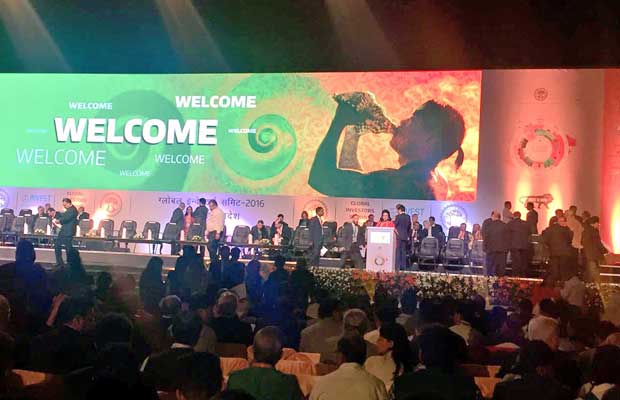 On the concluding day of Global Investors’ Summit 2016 five MoUs for investment of Rs 20,000 crore were signed in new and renewable energy sector in presence of CM Shivraj Singh Chouhan and Union Minister for Petroleum and Natural Gas (Independent charge) Dharmendra Pradhan and Energy Minister Paras Jain in Indore.

After the MoU ceremony Principal Secretary of New & Renewable Energy- Manu Shrivastava, informed about his ministry’s achievements in last one decade in the sector. He also informed about the rebates provided to investors by forming a new policy in power generation through solar, wind, small water and biomass gas plants. Speaking on the solar power project, he stated that largest project of 750 MW capacity has been set up in Rewa and the power generated from the plant will be supplied to Delhi metro.

MP Power Distribution Chairman Sanjay Shukla speaking on the occasion said financial institutions have become liberal to provide loan because of prospects of new and renewable energy in the State. He informed on production and prospects of export of equipment to be installed in solar and wind energy in renewable energy sector.
Madhya Pradesh government has received 2,630 intentions to invest mostly online, totaling Rs. 5, 62,847 crore . The top investment proposals in the lot are Rs 25,000 crore by Nuclear Power Corporation of India, Rs 20,000 crore by Aditya Birla Group and Rs 4,760 crore by Indian Oil. It is worth mentioning that bulk of the big-ticket intentions to investment in GIS 2016 has been made by public sector entities.

Shivraj Singh Chouhan said, “The response from industrialists was phenomenal and they were very keen to invest in the state.”