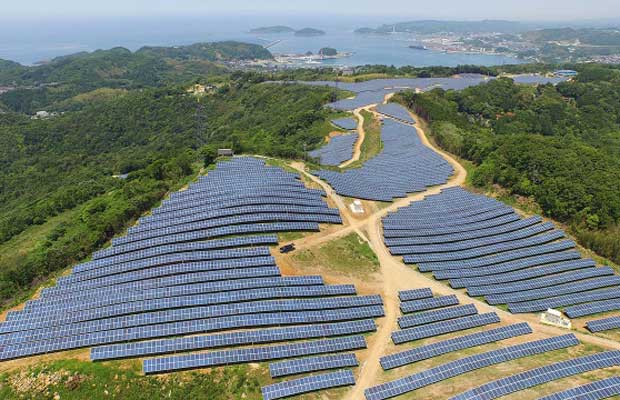 LG CNS has announced that it will construct a 55 Megawatt solar power plant in Shin Mine of Yamaguchi prefecture, Japan. The project amounts to approx. KRW 170 billion in size with the cost of construction and operation combined, and it will last about 18 months with the goal of commencing commercial operation in May 2018.  This project was ordered by Canadian Solar Inc.

With this contract, LG CNS will have the record of a total of 162MW construction in Japan, which is the highest among Korean companies.

LG CNS is the only company among Korean SI contractors that holds construction licenses – in the fields of electricity, construction, civil engineering, etc. – specifically required in Japan and has technologies and human resources to implement turn-key type projects including EPC (Engineering, Procurement, Construction).

Before signing the contract, a technical manager from Canadian Solar visited the headquarter of LG CNS and the sites where LG CNS has finished construction of and is operating facilities in Japan to thoroughly evaluate and verify the capability of LG CNS, and selected it as the contractor.

Considering such circumstances, this Shin Mine Solar Power Plant Construction Project is a case that proves the excellence of capability and expertise of LG CNS in constructing and operating solar power plants, and it is being highly recognized both home and abroad. Currently, LG CNS is negotiating an additional 100MW solar power plant project in Japan.

LG CNS is also  looking to diversify its energy business beyond solar powers plants on land to floating solar power plants, wind power plants, ESS (Energy Storage System), etc., and it plans to continuously expand its overseas business into other countries in the wake of advancing into the North American market.

Ha Tae-seok, Executive Director of LG CNS in charge of New Energy Business stated  “This Shin Mine Solar Power Plant Project will become a solid foundation for expanding our business in Japan, which is a difficult place for foreign companies to advance into, and we will expand our overseas energy business through close cooperation with global partners while developing eco-friendly energy business in Japan.”

Meanwhile, LG CNS reshuffled its organization to preemptively respond to the changes in the market and business environment for 2017. It created Smart Energy Division that will be in charge of energy, signage and smart building business to produce outcomes in terms of new growth and strategic businesses.