The latest trend in solar modules for larger-sized modules, caused by the pressure to show ever-increasing output is finally finding a clear pathway. Module output, which has seen major increases in the past few months on the back of these new larger modules now has support in the form of key suppliers like inverters, and trackers that have finally caught up with changes too. That means 166mm cells, seen as the first big shift away from the traditional 157 mm cut, will soon see real competition from the even larger 210 mm cells. 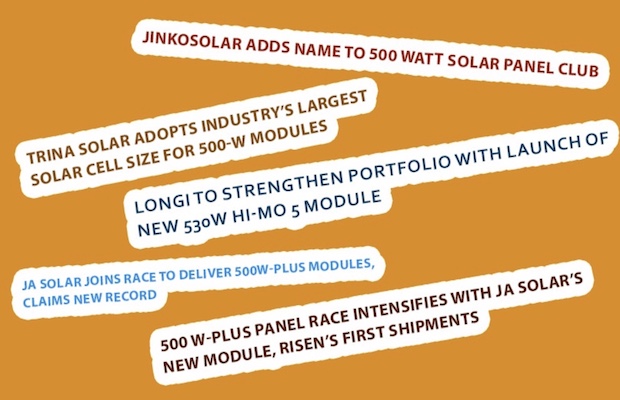 Keep in mind that the higher output, while driven by competition between module and cell makers, is driven overwhelmingly by higher size, and not better efficiencies. The  M6 size wafer which dominates currently is itself an outcome of the larger size push,  with a length of 166mm and a maximum diagonal length of 223mm, with cut corners. The previous ‘standard’ (still popular in India), the  M2 wafer size, had a length of 156.75mm and a diagonal length of 210mm. Thus, M6 offered an increase of 12.21% in area. That explains how power output on a typical 72 cell module went up from the earlier 370 w range to over 400 W during the 2018 to 2020 period as M6 took over. The ‘giant’ 210 mm cell module delivers a similar jump, to take output to over 500 W. Even as some of the most promising research into improving cell level efficiencies are still being tested in labs or in early pilots. What has helped technically is the advances in split-cell technologies, multi-busbar besides dense interconnection possibilities for linking up cells in a module.

With global manufacturers ranging from Longi solar to Jinko, JA  Solar, Trina Solar and more backing them, acceptance was a fait accompli, especially with related China-based suppliers also falling into line quickly. Now, even manufacturers in other markets, be it for inverters or trackers, have joined the list.

India’ where a major pipeline of fresh manufacturing projects is building up, for both cell and module production, will be important, and probably essential to ensure that these new facilities get their sizes right. 182mm (M10 wafers), if not 210 mm (M12 wafers), might be an absolute essential, especially for those targeting large, utility-scale projects, as these larger module sizes do deliver some specific benefits in terms of overall system costs, especially in wiring, racking, etc.

Newer cell manufacturing benefits from using split-cell technology for instance, where cells are cut into two or three pieces, and the generated current is divided through these, before recombining at a common busbar. This has tackled the biggest risk of thermal losses on a larger cell.

Tracker firms ranging from Arctech to Nextracker to Soltec and Trina Solar have already confirmed that they have, or will have products ready for M12 (210 mm cells) sized modules by end of  Q1 this year.

Inverter firms across the board have also confirmed readiness even earlier. By 2021 end or early 2022, expect the utility segment to make a decisive shift towards these larger M10 and M12 sizes, as overall costs align to make them a compelling buy for low-cost solar energy production.