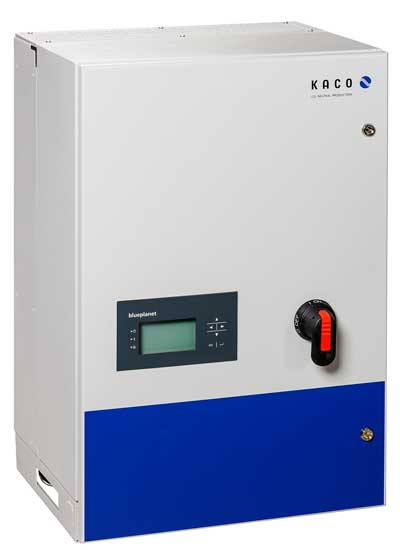 The Hassel solar park in Saxony-Anhalt will be equipped with 85 blueplanet 50.0 TL3 INT inverters by German manufacturer KACO new energy GmbH. The order has been placed by E.ON Energie Deutschland

Inverters from KACO new energy as well as its new reactive power technology will be employed in the Hassel solar park. The open space PV plant is currently being constructed and will be operated by E.ON. The project is the largest one by the German energy provider in the German state of Saxony-Anhalt and the first one of this scale that uses KACO new energy products. 4.7 megawatts are to be connected to the grid in August.

The Hassel solar park in Saxony-Anhalt will be equipped with 85 blueplanet 50.0 TL3 INT inverters by German manufacturer KACO new energy GmbH. The order has been placed by E.ON Energie Deutschland. Construction of the open space system westward of the community Hassel started in June.

The building phase has made good pace so that the completion of the first sub-project with a power of 4.7 megawatts is planned for the current month of August; this would mean the inverters would start to feed-in clean solar energy for 2,500 households into the medium voltage grid at the best time of year. In 2018, the array will be enlarged by a second sub-project of 3.1 megawatts; when completed, it will be the largest PV system by E.ON in Saxony-Anhalt with an overall power of 7.8 megawatts.

KACO new energy offers its blueplanet 50.0 TL3 INT inverter in different variants. This paid off when E.ON was looking for an inverter with integrated DC combiner with the purpose of simplifying installation. The XL variant chosen by E.ON also provides the DC and AC surge protection type 1+2 for the high level of protection against damage by lightning.

“The solar park is supposed to support grid management right from the start. We, as KACO new energy, have just had our new reactive power inverter made market-ready. We had good discussions with E.ON in which we came to the conclusion that the new unit meets all the requirements,” said Otto Gentner, Regional Sales Manager, Bavaria & Austria at KACO new energy. Eight blueplanet 50.0 TL3 RPonly subsequently completed the shipment to E.ON. The unit is AC coupled and delivers reactive power night and day.