The Falcon Ma’an solar photovoltaic (PV) plant, one of the largest in the Middle East has been connected to the Jordanian national grid. The 23.1 MWp PV plant – executed by the Italian company Enerray, a global EPC contractor, and Saudi renewable energy company Desert Technologies – puts Jordan on the map as a leading regional solar powered nation, the partners emphasize. 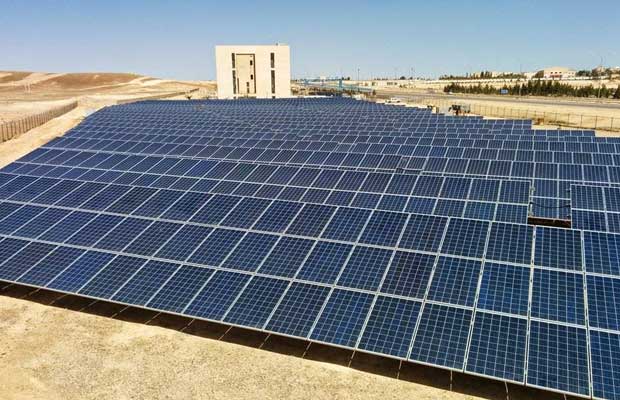 The solar PV plant covers a surface area of half million square meters and delivers 147 million kilowatt hours of solar power to the Jordanian national grid every year.

Jordan was the first country in the Arab world, which in its National Energy Strategy for 2005–2020 committed significant support for renewable energy.

Solar power for a sustainable future in Arab countries

“The Falcon Ma’an project confirms the importance of Jordan’s pioneering role in the adoption of solar energy in the region, that is why I am so thrilled and looking forward to visiting the project together with the renewable energy leaders from the Arab countries on December 8th,” stated Hans-Josef Fell, President of the Energy Watch Group, Member of the German Parliament 1998–2013 and Author of the German Renewable Energy Sources Act 2000.

“Solar power plays an important role in transitioning Arab countries towards their sustainable future. It can fight against poverty, with many new jobs created and we will discuss how solar energy can help greening deserts, desalinate seawater, for new food and biofuel production,” added Hans-Josef Fell. “Falcon Ma’an project proves that solar and renewables are not only the future of these countries, but that this future is here today!”

Desert Technologies (25%), Enerray (24%) and Seci Energia (1%), have sponsored the PV project together with their local partner, Catalyst Private Equity (50%).

The project has been financed under the innovative Seven Sisters renewable programme created by the World Bank’s International Finance Corporation (IFC) together with other lenders including FMO (Dutch Development Bank), The OPEC Fund for International Development (OFID), Finnfund (Finnish Fund for Industrial Cooperation), Europe Arab Bank and Arab Bank.

“The Falcon Ma’an solar plant, together with recently accomplished 10 MWp Shamsuna project in Aqaba, is another milestone in Enerray’s strategy of becoming one of the global solar industry leaders,” said Michele Scandellari, Enerray’s CEO.

“As the largest solar panels manufacturer in the world, we are proud of being the supplier to one of the first large-scale projects in Jordan and MENA region. It’s been a great pleasure again working with our long-standing partner Enerray and having initiated collaboration with Desert Technologies,” stated Gulnara Abdullina, General Manager, Africa & Middle East at JinkoSolar.

“Our superior Eagle module series will prove long-term reliability in harsh climates. This state-of-the-art project, together with others, will pave the way to a greater future solar deployment in MENA and beyond.”