JinkoSolar has emerged as the leading company in terms of global solar photovoltaic (PV) module shipments in 2019, GlobalData has revealed

The Chinese manufacturer topped the 2019 ranking with 14.2 gigawatts (GW) of PV modules compared to the second-ranked JA Solar’s 10.3 GW. Most of the companies featured in the table are from Asia-Pacific (APAC).

JA Solar in second place held a strong position with a shipment increase of around 17 percent due to high product quality and reliability, and performance and innovation. It reported that the efforts made to expand their presence in the emerging international markets in the Middle East have led to increased module shipments and profitability. 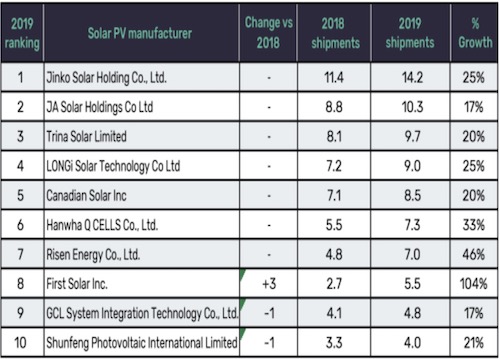 “Chinese manufacturers will continue to dominate as the overall leader in solar installations in 2020 as newer emerging markets in SE Asia, Latin America and the Middle East mark their presence on the solar map as demand centres. China, the US, Europe and India will continue to remain the major markets for the solar module suppliers,” Mathur said.