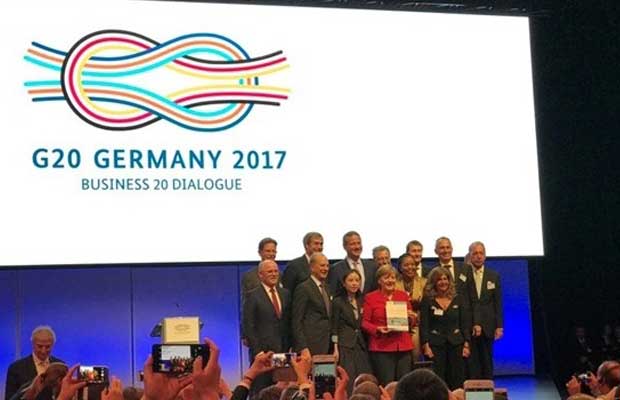 JinkoSolar as the only Chinese company participated in the B20 summit that was attended by More than 700 representatives from top companies and business associations from all G20 countries.

JinkoSolar Holding Co., Ltd., a global leader in the Photovoltaic (PV) industry has announced that as the only Chinese company, it was invited to dialogue at The Business 20 (B20) Summit held in Berlin on May 2-3, 2017.

More than 700 representatives from top companies and business associations from all G20 countries and sectors participated in the summit, striving to make the global economy more sustainable and future-oriented. The themes of this year’s G20 presidency are: Building Resilience, Improving Sustainability, and Assuming Responsibility.

As the co-chair of B20 ECRE taskforce, Ms. Dany Qian, Vice President of JinkoSolar, together with JurgenHeraeus, Chairman of B20, handed over B20 policy recommendations to the G20 president, German Chancellor Angela Merkel, as part of an official ceremony of B20 Summit 2017. Ms. Dany Qian was also exclusively invited to dialogue with Chancellor in the afterwards roundtable meeting.

Ms. Dany Qian also attended the panel “Towards a Future-Oriented Sustainable Economy: Energy, Climate Change and Resource Efficiency” with IEA, BASF, Enel and Continental. The B20 is convinced that a future-oriented, sustainable, and competitive world economy can only be guaranteed if businesses keep finding innovative solutions to curtail climate change, foster the energy transition, and decrease resource intensity. The G20 can achieve this by implementing the Paris Agreement, accelerating the market readiness and deployment of low-carbon technologies, and by establishing a Resource Efficiency Platform.

Concerning how business can best contribute to the implementation of the Paris Agreement, Vice president of JinkoSolar, Ms. Dany Qian emphasized: “Government laid out the essential goals in Paris Agreement, but promise must be followed by action. The implementation of the agreement relies largely on the involvement and engagement of business community. The private sector plays a much bigger and even more important role in the success of the Paris agreement. Starting from their own expertise and experience, companies can, for example, steer their capital towards direct investment in clean energy projects and low carbon, energy efficient technology and businesses, the purchase of and increased use of renewable energy and becoming carbon neutral. A few major companies are striving to run entirely on renewable energy. They are doing so by reporting emissions and disclosing climate change relevant data and information, adapting their business model and supply chain to seize this energy transition opportunity and create new jobs, internally pricing carbon, complying and aligning with government climate and energy policy, supporting the development of low carbon technology and science and of course taking a responsible approach to lobbying on climate action. “

As the world’s largest solar company, Jinkosolar will need to assume leadership in the transition to a future oriented sustainable economy by further driving down the cost of solar power to make it more economically viable to switch to renewable energy and more feasible to implement the Paris Agreement.