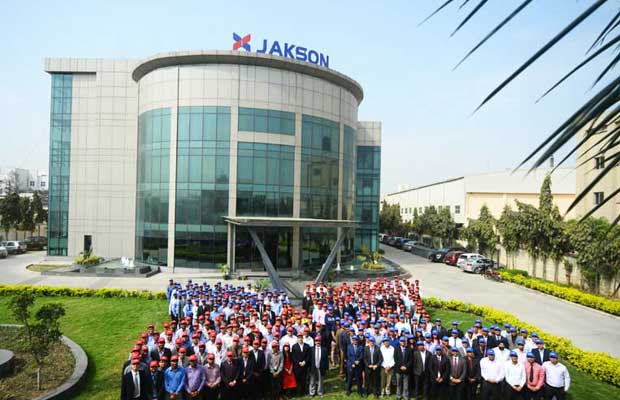 Jakson Group will invest Rs 700 Crore in a new production plant for solar power modules in Gujarat that will have a capacity of 1,000 MW of solar modules and 250 MW of solar cells in three years.

At a time when most domestic solar manufacturers are struggling with idle capacity in the face of cheap solar cells and modules being imported from China, Noida-based Jakson Group is setting up a greenfield solar power plant in a seemingly contrarian decision.

It is investing Rs 650-700 crore in a new solar power plant in Gujarat that will have a capacity of 1,000 MW of solar modules and 250 MW of solar cells in three years, Jakson Group CMD Sameer Gupta said. “We’ve identified the plots where the plant will be based and expect to have 500 MW of module manufacturing capacity up and running by June 2018, reaching our full capacity by mid-2020,” he told ET.

The firm, which has a small 70 MW manufacturing plant in Greater Noida at present, is confident about competing with Chinese imports. “The cost difference between the modules we make at Jakson and Chinese ones is not more than 2%,” Gupta said.

Prices of Chinese solar cells and modules have dropped steeply in the last two years, but Gupta does not think they will do so any further. “Prices fell because of overproduction in China, but now Chinese demand is picking up,” he said.

“China has shut down $350 billion worth of coal-fired power plants and is investing in renewable energy, so demand in China is bound to keep rising, which in turn will raise prices of solar equipment too,” Gupta said. “Already, in the last three months, the cost of Chinese modules has gone up from around 28-29 cents per watt to 31-32 cents.”

But even if Chinese equipment gets cheaper, it will not spell disaster for Jakson. “We’ve done extensive research, getting PwC to prepare a report for us. Even in the worst case scenario of Chinese module prices falling to 25-26 cents per watt, we will not be in the danger zone though obviously profitability will be affected,” said Gupta.

He said Jakson is funding the project through internal accruals and debt in the ratio of about 30:70. “We chose to locate in Gujarat as there will be ports close by, since we expect to export a good part of our production, especially to African countries,” Gupta said.

India’s domestic module manufacturing capacity is currently around 8,113 MW, out of which 5,286 MW are operational. However, actual manufacturing in 2016-17 was barely 1,000-1,500 MW, according to Mercom Capital Group that tracks the segment. That is because there is little demand for domestic products because Chinese imports are substantially cheaper.

Around 90% of the modules used in Indian solar projects are imported, mostly from China. Indian solar manufacturers have even petitioned the ministry of commerce to impose anti-dumping duty on imported solar cells and modules in a desperate effort to stay afloat.

But Gupta is unfazed. “In our case, it will be backward integration,” he said. “We are solar developers ourselves and also major EPC players in the solar business. Our own projects will consume about 500 MW, or half our production capacity.”

One of the oldest of India’s power companies, Jakson Group, started in 1947, has ventured heavily into solar in the last few years, running 60 MW of ground mounted solar power projects and 6.5 MW of solar rooftop. It will have put up around 450 MW of EPC solar projects by end 2017.