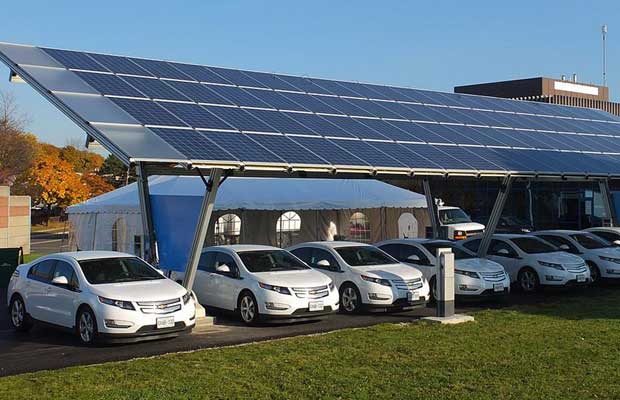 According to details provided by company, the rickshaw owner’s will be able to pay only Rs 30 from the solar charging station installed by ABB India instead  Rs 40- 50. As per the company reports Jabalpur currently has 5,000 petrol/ diesel rickshaws which emit 46 tonnes of carbon dioxide per day and consume 20,000 litres of fuel daily. The solar charging stations would help 400 e-rickshaws save around 1,600 litres of fuel and 37 tonnes of CO2 emission per day.

The solar panels are also connected to the state grid to feed in additional power generated through net metering. The solar powered charging stations are part of a renewable energy project initiated by the Jabalpur Smart City Corporation.

“Such pilots are key to creating a wider eco-system of clean energy generation. It is an important step that this project has been included as part of the Smart City Mission, as this will aid faster deployment of such technology and also ultimately different modes of EVs and charging infrastructure can be exp explored with the required urban planning and development,” said Sanjeev Sharma, Managing Director, ABB India.

“We are creating renewable-based infrastructure for the e-rickshaws at nine locations throughout the city. For this project we generate solar power, some of which is fed back to the grid,” said Sachin Vishvakarma, CEO, Jabalpur City Transport Services Ltd.