It Is Imperative To Explore New Technologies For Developing Greener Fuels: Piyush Goyal 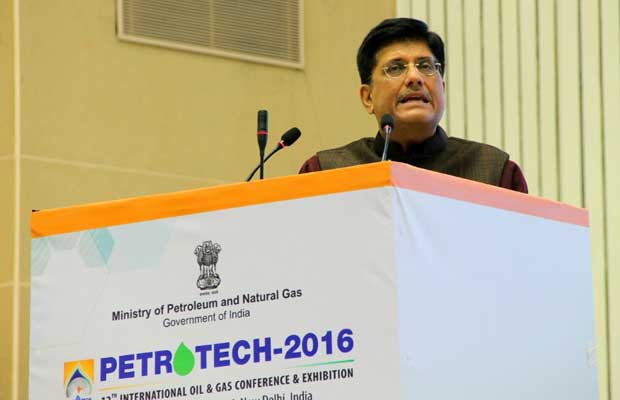 Union Minster of State for Power, Coal, New & Renewable Energy and Mines, Piyush Goyal chaired a Ministerial session on ‘Hydrocarbons to fuel the Future: Choices and Challenges’ at the Petrotech-2016 on Tuesday.

Goyal at Petrotech emphasized on the point that India, despite the dominance of fossil fuels in its energy mix in the near future due its development imperatives, stands committed to the Global efforts to fight Climate Change. He added that it is imperative to explore new technologies for developing greener fuels by increasing the use of renewable sources of energy and working towards achieving greater energy efficiency in power generation, transmission and distribution.

The Minister noted that Government of India is preparing a holistic framework so as to cut our dependence on fossil fuel imports and to become self-reliant in the oil and natural gas sector. Further, the ensuing policy changes would be in consonance with India’s commitments at the Paris Climate Summit for reducing the carbon intensity of GDP growth, he added.

Talking further on the initiatives on reducing India’s carbon footprint, the Minister said that India has taken a lead in the field of energy efficiency. He added that currently India has replaced one-third of total old energy inefficient incandescent bulbs and CFL lamps with LED lights which has resulted in a reduction in the carbon emissions of about 80 million tonnes a year and a saving of about 20GW of peak load.

“We have to look at a World beyond Fossil Fuels”, said Goyal while restating the vision of PM Modi of India of ‘Achieving Energy Security for India based on Clean Fuels’. The Minister noted that the domestic demand for gas in the sector of power generation has not been fully met at present, though he expressed optimism that the new partnerships formed with the participating stakeholders at Petrotech-2016 would help us revive India’s stranded Gas based power plants in the near future.

Goyal envisioned that gas based power generation is the key to achieve Government of India’s goal of ‘24×7 Power for All’. He said “Building partnerships with energy rich nations and exchanging new technologies and best practices with each other is the only way to provide affordable, accessible and sustainable power for all”.

In his concluding remarks, Goyal said that the partnership between the Ministries of Power and Petroleum & Natural Gas has reaped rich dividends in achieving a secure energy future for the people of India. Such partnerships can be extended to include all the stakeholders of Petrotech-2016 so as to magnify the positive results in the times to come, he added.