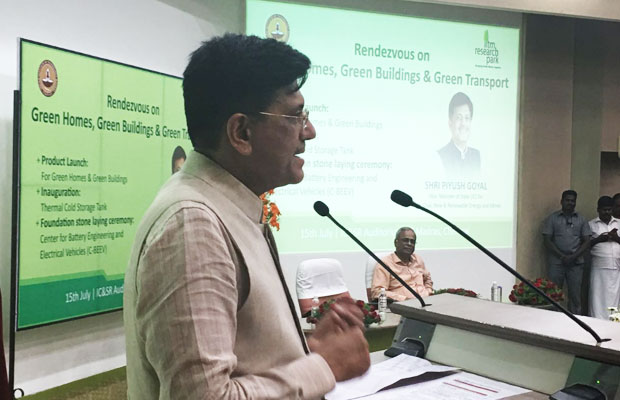 Goyal further added that this fusion of Solar Technology for providing green energy & energy security can be utilized for serving the under privileged & ultimately, the whole nation.

The minister stated that India has the skill, knowledge, capacity to develop cutting edge green technology which would provide power to the weaker section of society. He emphasized that India has to innovate; it has to invest in R & D & promote young innovators. “This way, we can provide a way forward to the World”, the Minister added.

Referring to IIT Madras’ green technology research, the Minister said that this shows a new kind of partnership made possible between Public-Private-Professor-People (PPPP). He said these technologies can make uninterrupted power accessible and affordable for the poor and aligns with the Government’s commitment to make power available to every home in India.

Speaking to reporters there the Minister explained in detail the economies of scale being achieved in the Power sector. Goyal quoted the example of Rajasthan where new tenders have been recently opened, which has led to a progressive decrease in the price of Solar Power to Rs. 4.35 per unit.

Listing the initiatives taken by the government to give thrust renewable energy, the minister said the centre has launched two pilot projects at Phalodi in Rajasthan and Sasar at a cost of 80 crore rupees to provide solar power to all households in these two areas.