Insolight claims that its panels, thanks to a patented optical system that concentrates sunlight on a kind of miniature photovoltaic cell normally used in satellites, deliver high efficiencies at a lower cost. 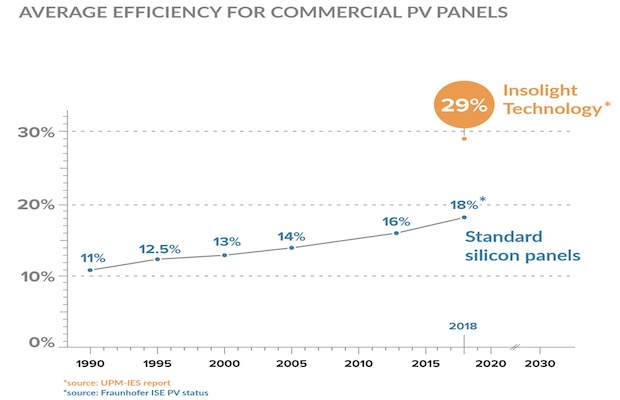 The Lausanne, Switzerland based Insolight’s latest claims, which follow testing by an independent lab, should be a reason to think for naysayers who still believe solar cannot solve the energy challenge in a major way. While Solar capacity has grown exponentially in the past decade, with the last 5 being an especially frenetic time for growth, the industry’s recent troubles have caused doubts over prospects in the near term.

While it will probably take time to take the product to market in a meaningful way, it is reassuring to note that a key objective of Insolight has been to reduce residential solar costs.

So how does its tech work?

For starters, it claims to have a radically new design.

Insolight’s claims that its photovoltaic modules rely on a unique patented technology called planar optical micro-tracking. Embedded under the cover glass, an optical layer funnels concentrated light beams directly onto an array of high-efficiency solar cells. The integrated tracking system keeps each cell in focus regardless of the Sun’s position. The resulting flat panel combines very high efficiency with ease of mounting on any standard rooftop or ground-mounted installation.

Where this gets interesting is the efficiency claim, where the firm claims that the technology allows unprecedented results for a flat solar panel, with apeak efficiency close to 30%– at a time when mainstream modules are averaging closer to 18%.

According to them, since the solar light input is optically boosted, Insolight’s modules can reach an optimum efficiency with only 0.5% of the surface covered by solar cells. This approach dramatically decreases the cost of space grade photovoltaics and enables its use in a consumer product.

With its novel architecture, Insolight targets to reduce solar electricity costs by 30% on rooftops, by significantly boosting the energy yield and the return-on-investment – well beyond the capabilities of mainstream PV modules.

Finally, the company claims that its modules are compatible with existing technology, saying that its system can be assembled as an overlay on top of mainstream PV modules. A hybrid approach that can be especially useful to maintain energy harvesting under cloudy conditions. The firm says that the technology involves a few module-level assembly steps, which can be added at the end of existing production lines, taking leverage of production capacities already in place. No complex cleanroom processes are required.