Inox Wind has reported higher revenue in the December quarter, but the firms’ net loss has also widened to Rs 51.97 crore

Inox Wind has issued its financial results for the quarter ended December 31, 2020, reporting a higher revenue from the previous quarter and from the same quarter in 2019, however, the firms’ net loss also widened to Rs 51.97 crore from Rs 27.47 crore during the same quarter last year.

The firm also reported that during the quarter, it has raised Rs 199 crore by issuing Non-Convertible Debentures (NCDs) at 9.5 percent. The proceeds were utilised inter alia to optimise working capital and retire high-cost debt. It will improve the short term fund availability of the company. On the front of raising equity, IWISL has already started allocating the equity against multiple EOIs (Expression of Interests) received by the company. 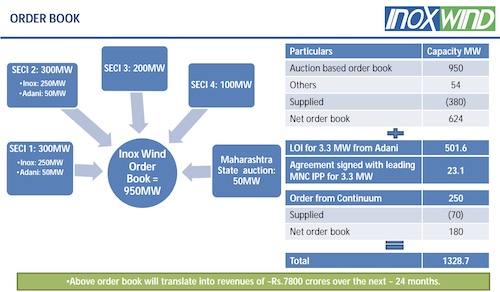 “Considering that the group is in the business of Manufacturing of Wind Turbine Generator which falls under the Renewable Energy sector being the priority sector, the management believes that the impact of this (pandemic) outbreak on the business and financial position of the group will not be significant. The management does not see any risks in the group’s ability to continue as a going concern and meeting its liabilities as and when they fall due,” the company stated.

The firm also reported that the execution of the Continuum project (250 MW) is in full swing and commissioning of turbines will take place progressively in the near future. The firm has also commissioned Renew Power‘s 18 MW project at Anjar, in Gujarat along with some small retail orders.

The firm has also stated that it has achieved financial closure for an un-commissioned 100 MW project of SECI SPVs with PFC. This will enable the firm to free up significant short term capital blocked in a 50 MW un-commissioned SPV.

Furthermore, the firm has reported that all future project executions at Dayapar (Gujarat) including the Continuum order will be on a plug-and-play basis given the common infrastructure which includes the 220 KV transmission line, the 220 kV substation and bay are already in place.