INKEL Limited has announced that it has commissioned a 0.6MW grid-connected solar power plant at a 110 kV KSEB Substation at Kottiyam in Kollam district of Kerala under the IPDS scheme.

The project was inaugurated by M.M Mani Hon’ble Minister for Electricity on September 16, 2020. The project was executed by INKEL Limited (A Public-Private Partnership Company – Initiated by the Kerala Government). 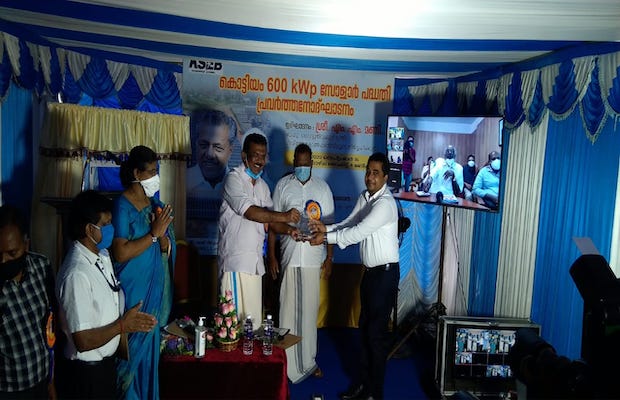 KSEB has appreciated with a memento to Sam Roofus Asst. General Manager (Solar) INKEL Limited for the timely execution of the project. INKEL Solar Kerala IPDS

The IPDS or Integrated Power Development Scheme was launched by the Ministry of Power. Its main objective is the strengthening of sub-transmission and distribution networks in the urban areas while improving the metering of distribution transformers/feeders/consumers in the regions.

Furthermore, schemes for Enterprise Resource Planning (ERP) and IT enablement of balance urban towns are also included under IPDS. The scope of IT enablement has been extended to all 4041 towns as per Census 2011. And underground cabling to include additional demand of states and smart metering solution for performing UDAY states and solar panels on government buildings with net-metering are also permissible under the scheme.

The Power Finance Corporation (PFC) is the Nodal agency for the implementation of the Integrated Power Development Scheme.