Modi government has set a 100GW target for solar power by 2022, out of which 20GW has been allocated to solar parks. India is expected to double the target for energy to be generated from solar parks by 2020, as roof-top installations progress has turned out to be slower than anticipated.

Currently, there are 34 solar parks planned across 21 Indian states, where projects aggregating 20 GW will be set up. According to Marcom Capital incomplete solar park infrastructure are affecting large-scale project development in the country.

The research firm notes that project developers are facing issues including, lack of access roads, clean green lands, and clear demarcation of land areas in these solar parks. Officials at government agencies, on the other hand, are pointing out that development of solar parks is in its early stages and state nodal agencies are working to resolve issues as they arise.

All 34 solar parks have received in-principle approvals. Under the guidance of the MNRE, in some states, the SECI, has formed joint ventures with state renewable energy agencies to construct these solar parks.

The government’s rush to auction projects in these parks ahead of completing land acquisition formalities has led to project developers winning bids but finding infrastructure not ready to start construction. In some cases, such as the Pavagada, Charanka and Kadapa solar parks, bid-submission deadlines for tenders have been repeatedly extended.

“The issues around solar parks are typical to the Indian solar sector,” said Raj Prabhu, CEO of Mercom Capital Group. “Most policies are well-intentioned with top-down goal setting, but the problem usually is on the execution side.”

A developer involved in the recent auctions for projects in solar parks speaking to the research firm said the positives are that the infrastructure promised for solar parks is ideal for international investors and the bidding process is transparent. On the other hand, “infrastructure is not even close to being complete.” The government is in a hurry to invite tenders even before they have completed land acquisition which ends in a delay of four to five months before the auctions happen. Developers, meanwhile, are paying for park infrastructure that is non-existent revealed Marcom Capital.  Much of the infrastructure is being built parallel to project construction and will be complete when projects are close to completion, which doesn’t help the developers. After paying steep park fees, developers are having to build parts of the infrastructure. “We cannot wait for roads to get built; there are going to be evacuation issues with each of these parks,” said a developer to Marcom.

There are trees that need to be cut and ground levelled in order to start construction work. There is no road access and transmission lines need to be removed to start work, commented another developer.

Developers are in some cases incurring expenses to clean the land, build roads, and still waiting for power to be evacuated after commissioning. All of this can seriously affect project costs and profitability says Marcom. In Uttar Pradesh and Karnataka, there are delays in getting the land. Park infrastructure is not ready and the power evacuation facility at the Pavagada solar park is inadequate. There are also complaints of evacuation delays in the Kadapa Solar Park in Andhra Pradesh, where the engineering, procurement and construction (EPC) bids are out.

“Solar parks are huge projects and these problems are minor when you look at the capacity that will be achieved; it has just been two years since we ventured into solar parks,” said a SECI official speaking to the research firm. Nodal agencies are resolving these issues at the ministry-level to fast-track solar park development.

An official at Rajasthan Renewable Energy Corporation said that the only delays were issues relating to developers approaching them late. “On our part there have been no delays.”

An official at Andhra Pradesh Solar Power Corporation (APSPCL) confirmed that the Kurnool solar park has been completed and that infrastructure is under development in other solar parks in the state.

“In Rewa, the park development is in progress and we intend to have infrastructure ready before we invite tenders so that the developers can construct projects without any hurdles or delays,” commented an official at Madhya Pradesh Urja Vikas Nigam (MPUVNL).

MNRE has requested that the Principal Secretaries and the Chief Secretaries of State Governments take up necessary action for speedy implementation of solar power projects so that solar targets are achieved on time. Recently Minister of Power and Renewable Energy, Piyush Goyal  at Lok Sabha stated that “The MNRE is having regular review meetings with state governments and solar power park developers to ensure the timely completion of solar parks.”

“Solar parks cannot be completed within days. A lot of planning is required; problems will come up but we are here to handle them,” said an MNRE official to Marcom Capita Group. 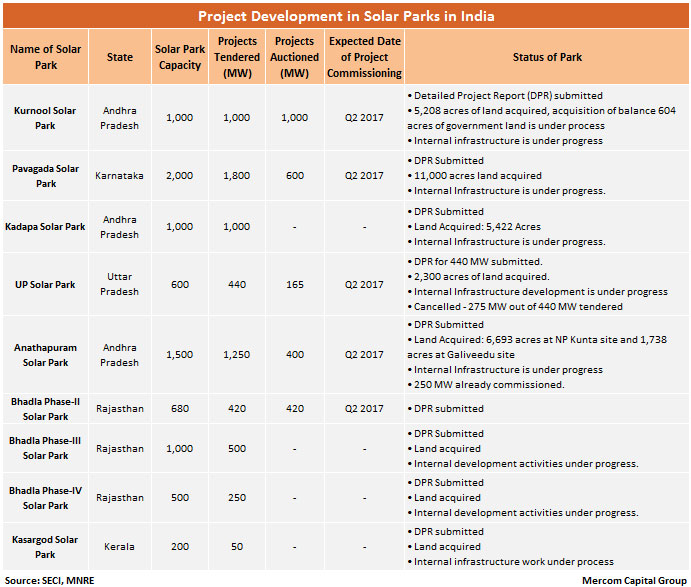