Prime Minister Modi said Indo-Japan ties are not limited to bilateral or regional spheres. It is closely cooperated on key global issues and discussed ways to deepen ties in trade, security and civil nuclear energy. 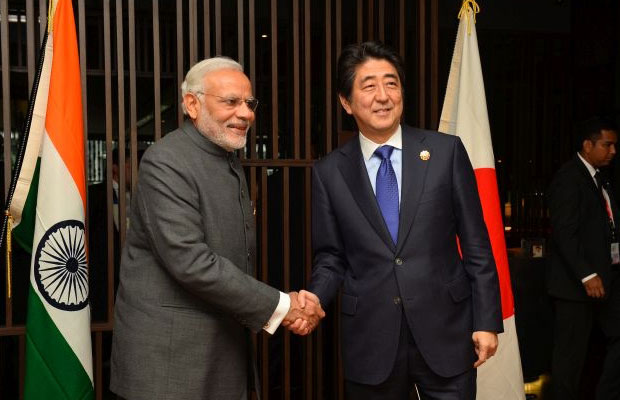 Prime Minister Narendra Modi at a joint press event in Japan said that the civil nuclear pact between India and Japan would open a new chapter in cooperation in the clean energy sector between both countries.

The two Prime Ministers expressed satisfaction “at the entry into force of the agreement between the Government of the Republic of India and the Government of Japan for Cooperation in the Peaceful Uses of Nuclear Energy. They looked forward to a working group to strengthen bilateral cooperation in this field and reiterated their shared view that the agreement reflects a new level of mutual confidence and strategic partnership in the cause of clean energy, economic development and a peaceful and secure world,”the joint statement stated.

With the completion of the civil nuclear deal, India is looking for more collaboration between nuclear companies of the two countries, Prime Minister Narendra Modi said “We had signed a historical pact for peaceful use of nuclear energy during my visit to Japan last year. I am whole-heartedly thanking Japan’s parliament, its people and particularly Prime Minister Abe for its ratification.”

Recognizing the need to access to reliable, clean and affordable energy is critical for the economic growth of both countries; both the leaders in their joint statement “decided to strengthen bilateral energy cooperation and welcomed the India-Japan Energy Partnership Initiative as well as early convening of 9th Energy dialogue. They appreciated Japan’s proposal for India-Japan Clean Energy and Energy Efficiency Cooperation Plan.”

“They also welcomed the efforts to promote renewable energy, including the establishment of the International Solar Alliance (ISA), and the progress of New Energy and Industrial Technology Development Organization (NEDO)’s demonstration project such as a micro grid system using solar power in Neemrana. They looked forward to further acceleration of cooperation in areas of energy saving, energy efficiency and energy storage as well as manufacturing of eco-friendly vehicles including hybrid and electric vehicles,” the joint statement said.

The nuclear cooperation agreement was signed last November during Prime Minister Modi’s visit to Tokyo. The deal allows Japan to export nuclear technology to India, making it the first non-NPT signatory to have such a deal with Tokyo.

During the talks between the two leaders, India and Japan inked 15 pacts to give a boost to cooperation in various key sectors, including civil aviation, trade, and science and technology.

“We have just signed a joint statement which will serve as a milestone to open a new era for Japan-India relationship… based on that we will strongly promote Japan-India special strategic and global partnership to drive peace and prosperity for Indo-Pacific region and the whole world,” Prime Minister Abe said.