The report points out at a healthy solar PV market in the country which continues to grow at a remarkable rate. 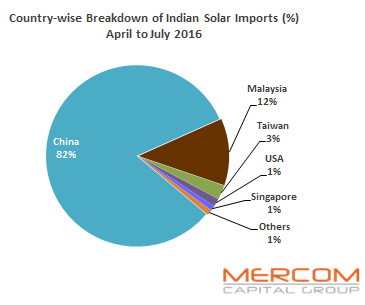 Mercom Capital notes that China is the largest exporter of solar modules and cells to India followed by Malasiya.  82% of India’s total solar imports are from China while Malaysia and US accounts to 12% and  1% respectively.  It will interesting see if the imports from U.S. will increase after the recent ruling from the World Trade Organization (WTO) is enforced, which found India’s domestic content requirement discriminatory against U.S. manufacturers.

According to the research firm the largest importer of Indian solar modules and cells is United Kingdom and Italy which accounts to 34.1% and 11.4% respectively, while China imports just 10.7 percent. 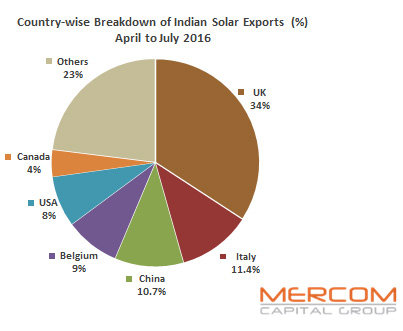 Raj Prabhu, CEO of Mercom Capital Group in a statement said  “In order to reach the goal of installing 100 GW by 2022, developers will have to continue importing cheaper cells and modules to be able to compete in hypercompetitive auctions and build projects that yield decent returns.”