IEEFA’s briefing note, India’s electricity sector transition still on track despite a weak FY2018/19, projects renewable additions through 2021/22 based on the auction and tender activities during the past 18 months. 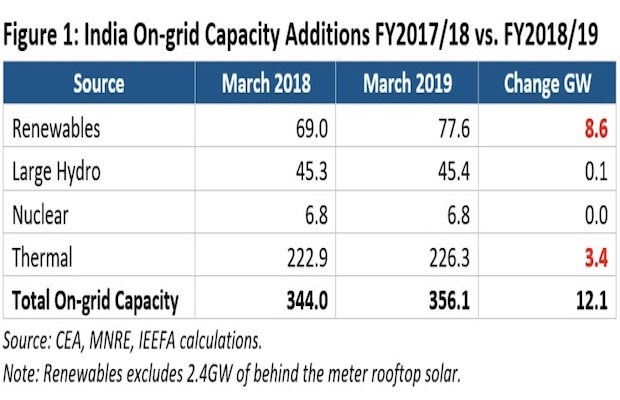 The 2018-19 financial year turned out to be a sluggish year for both the renewable as well as thermal sectors in India in terms of increased generation capacity. In total, only 12GW of net new power generation capacity was added; compared to an average of 22GW added between FY2012/13 and FY2016/17 and 17GW in FY2017/18.

New on-grid capacity additions in renewable energy stood at 8.6GW (6.5GW of solar, 1.6GW of wind and 0.5GW from other sources) for the financial year ending in March 2019 – a disappointing 40% drop from the peak renewable energy installs achieved in 2016/17.

While, in the thermal segment the country introduced 5.8GW of new coal-fired capacity but shuttered 2.4GW of end-of-life thermal power plants during the year, resulting in net new thermal capacity adds of just 3.4GW. The lowest level of thermal coal power plant net additions in a decade.

IEEFA’s briefing note, India’s electricity sector transition still on track despite a weak FY2018/19, projects renewable additions through 2021/22 based on the auction and tender activities during the past 18 months.

According to co-author and IEEFA research associate Kashish Shah, “the continued decline in thermal capacity additions was foreseeable given the ongoing financial distress of the thermal power sector and the loss of competitiveness compared with domestic renewable energy. Against this, the slowdown in renewable capacity additions at half the government’s targeted run-rate contradicts expectations.” Highlighting policy uncertainties as well as a lack of grid infrastructure as some of the key reasons for below-expected renewable capacity installations in FY2018/19.

Despite the evident chaos in incomplete installations, India exited the year with 22.5GW of renewable capacity auctions awarded but yet to be built, and another 37GW under various stages of tendering and bidding.

Given the existing trajectory of wind and solar as well as other renewable sources of biomass and run-of-river (RoR), IEEFA forecasts India will reach 144 GW renewable energy capacity by FY2021/22, not far from the aspirational 175GW target set back in 2015. This places India on track for a run-rate that will exceed its 275GW target in 2027.

IEEFA expects another near flat year for utility-scale solar with 7-8GW commissioned by March 2020, owing to import restrictions on solar modules for two years (imposed in July 2018). In spite of this, 9GW of rooftop solar could be installed in the coming three years given the 68% growth rate in annual installs during the calendar year 2018.

Wind power will most likely bounce back with potentially 5GW of new capacity under construction right now with a commissioning deadline in FY2019/20.

“There are challenges which could hinder acceleration of renewable energy capacity. The government of India must anticipate these challenges and plan to mitigate the risks as soon as possible,” Shah added.