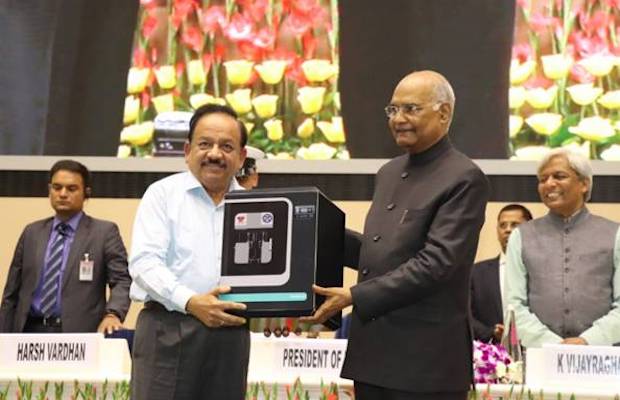 President Ram Nath Kovind on Sept. 26 unveiled the country’s first indigenous High-Temperature Fuel Cell System which has been developed by the Council of Scientific and Industrial Research (CSIR).

According to the government statement, the 5-kW fuel cell system generates power in an environmentally friendly manner using methanol / bio-methane, with heat and water as by-products. Another development is its efficiency, the fuel cell system is over 70 percent efficient, which is much higher than other fuel cells which use other energy sources.

The fuel cells developed are based on High-Temperature Proton Exchange Membrane (HTPEM) Technology. This development, according to the government, is beneficial for distributed stationary power applications like –for small offices, commercial units, data centers, etc.

These fuel cells will provide reliable and continuous power to these distributed units for their systems and air-conditioning. The fuel cell system is capable to meet the requirement of efficient, clean and reliable backup power generator for telecom towers, remote locations, and strategic applications as well. The fuel cell system is designed to replace Diesel Generating (DG) sets and help reduce India’s dependence on crude oil.

President Kovind unveiled this system on the occasion of the CSIR foundation day at Vigyan Bhawan. The ministry of science and technology said, “In the field of clean energy, fuel cell distributed power generation systems are emerging as a promising alternative to grid power. The fuel cells fit well in India’s mission of replacing diesel with green and alternate fuels. The development of fuel cell technology is indigenous and carries immense national importance in terms of non-grid energy security,” in a statement.

On the occasion, it also announced the Shanti Swarup Bhatnagar award for science and technology for the year 2019, selecting 12 scientists from different institutions for this most coveted award in multidisciplinary science in India.