India’s 60-65 per cent of installed power generation capacity will be from Renewable Energy: Piyush Goyal 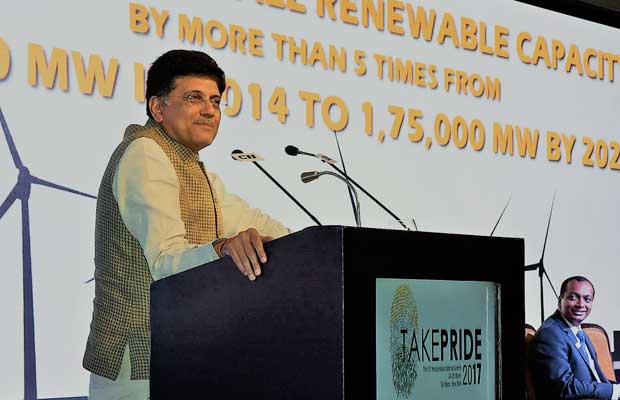 “India’s renewable energy programme is a great example of how you can do big by thinking big.”

Power Minister Piyush Goyal today at Take Pride event organized by CII said that India’s 60-65 per cent of installed power generation capacity will be from renewable energy.
“Going by prices we have discovered, I am inspired to say that 60-65 per cent of India’s installed capacity base will be green energy,” Goyal said.

He further added, “India’s renewable energy programme is a great example of how you can do big by thinking big.”
Earlier this month, Goyal predicted that India’s solar power generation capacity will cross 20,000 mw in the next 15 months, from the current 10,000 MW, and said drastic reduction in costs of solar power is proof of maturity of the sector.

Lower capital expenditure and cheaper credit have pulled down solar tariff to a new low of Rs 2.97 per unit in an auction conducted for 750 mw capacity in Rewa Solar Park in Madhya Pradesh last month.
The auction was conducted by a joint venture of Madhya Pradesh government and the Solar Energy Corporation of India (SECI).

The wind power tariff has too dropped to a record low of Rs 3.46 per unit in an auction of 1,000 mw capacity conducted by the SECI.At present, out of 315 gw of total power generation installed capacity, around 50 gw is from renewable sources while large hydro projects (above 25 mw) constitute 44 gw.

As much as 14,000 mw (or 14 gigawatt) of solar projects are currently under development and about 6 gw is to be auctioned soon. In 2016, about 4 gw of solar capacity was added, the fastest pace till date.

According to power ministry estimate, another 8.8 gw capacity is likely to be added in 2017, including about 1.1 gw of rooftop solar installations.

The government is targeting 100 gw of solar and 60 gw of wind energy capacity by 2022. Total renewable energy generation capacity is envisaged at 175 gw by 2022.

Commending the government’s initiative on Goods and Services Tax (GST), he said: “Nearly seven constitutional laws have been passed in the last two and a half years by this government without a majority in the Rajya Sabha. Our finance minister is the best finance minister.”