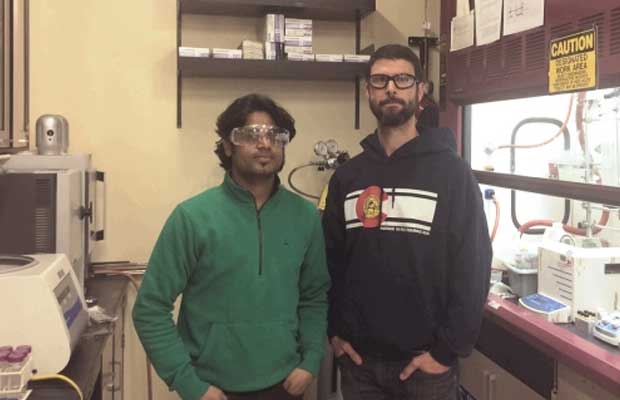 Swarnkar carried out research for six months (November 2015 to April 2016) as an intern at the National Renewable Energy Laboratory (NREL), Colorado, U.S.

Most research into perovskites has centered on a hybrid organic-inorganic structure. Since research into perovskites for photovoltaics began in 2009, their efficiency of converting sunlight into electricity has climbed steadily and now shows greater than 22 percent power conversion efficiency. However, the organic component in it is volatile and becomes completely unstable under ambient conditions within a short span of time. This renders the material unsuitable for commercial photovoltaic applications.

NREL scientists turned to quantum dots-which are essentially nanocrystals-of cesium lead iodide (CsPbI3) to remove the unstable organic component and open the door to high-efficiency quantum dot optoelectronics that can be used in LED lights and photovoltaics.

Speaking to The Hindi Swarnkar said “Though the completely inorganic material is stable, there are problems. In bulk form [bigger size crystal], the cesium lead iodide perovskite absorbs sunlight light only up to about 400 nm. So it does not have much application as a photovoltaic material.”

The researchers turned to quantum dots-which are essentially nanocrystals-of cesium lead iodide (CsPbI3) to remove the unstable organic component and open the door to high-efficiency quantum dot optoelectronics that can be used in LED lights and photovoltaics.

The nanocrystals of CsPbI3 were synthesized through the addition of a Cs-oleate solution to a flask containing PbI2 precursor. The NREL researchers purified the nanocrystals using methyl acetate as an anti-solvent that removed excess unreacted precursors. This step turned out to be critical to increasing their stability.

“We found that by reducing the size of the crystals to nanometre range, the material at ambient temperature is able to absorb visible sunlight till 700 nm. This is because the material retains the desirable crystal structure (cubic phase) even at room temperature.. The nanocrystals were found to be stable from —196 degree C to about 200 degree C.” said Swarnkar. He added “By reducing the size of material to nanometer range, the surface to volume ratio increases tremendously. As a result, high surface energy comes into play and makes the high-temperature cubic phase crystal structure stable even at room temperature.”

The efficiency is similar to record quantum dot solar cells of other materials and surpasses other reported all-inorganic perovskite solar cells.

The research was funded in part by the Energy Department’s Office of Science and by the SunShot Initiative.