Home » News » Indian Railways to install 5GW of solar by 2025 in partnership with UNDP: Report

Indian Railways to install 5GW of solar by 2025 in partnership with UNDP: Report 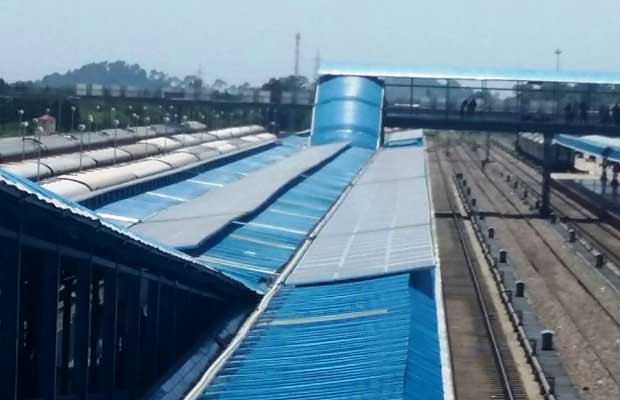 Indian Railways is reportedly targeting to install 5GW of solar by 2025 in partnership with United Nations Development Programme (UNDP).

PV Tech reports that Prodyut Mukherjee, national technical consultant, UNDP at his presentation at the International Conference on Decarbonisation of Indian Railways stated that the target will be realized using vacant Indian Railways land and rooftop space, but it will need greater involvement from the private sector and increased investments as well as innovative low-risk business models.

Railways, which spends about Rs. 30,000 crore per year on its energy requirements, is trying to bring this cost down by 10 per cent.

Minister of Railways Suresh Prabhakar Prabhu in a meeting of the consultative committee of MPs for the Ministry of Railways said that with the Indian Railways being a significant consumer of energy, identifying cost-effective options to achieve and realize an energy system with least environmental impacts is essential.

Vision 2020 document of the Indian Railways states that the key target is to utilize at least 10% of its energy requirement from renewable sources. As a part of this, Indian Railways has planned to set up 1000 MW solar power plant and about 200 MW of wind power plants by 2020 across Zonal Railways & Productions Units. The first major feat was achieved in Harnessing Green Energy on Railways when a 10.5 MW capacity Wind Power plant was set up in 2009 by the Integral Coach Factory (ICF), Chennai-a premier Production Unit of Indian Railways, making ICF the ‘First Green Production Unit’ of Indian Railways. The next significant effort was setting up of 26 MegaWatt Solar Power Plant commissioned in 2016 at Jaisalmer in Rajasthan in North Western Railway (NWR). As of now, Railway is already harnessing 50MW Green Energy from solar and wind power plants including harnessing solar energy at rooftop of stations and service buildings. This includes 500 KW each on Varanasi, Katra, Jaipur, Kolkata Metro and Secunderabad Railway Stations.

Referring to the challenges in the field of solar energy the Minister said that firstly its cost of production is gradually becoming less and but there are still issues of storage of solar energy. He pointed out that globally there are efforts going on for developing storage technologies and a breakthrough is likely to be achieved soon.

Other important activity which Railways has done is replacement of conventional light sources with LED light sources which is more energy efficient and more environmental friendly. Members at the meeting offered several suggestions for increasing the production of solar and wind energy.