India will lead the world towards clean energy: Piyush Goyal 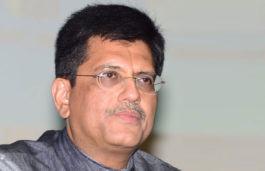 Speaking on the occasion Goyal said that India now will lead the world towards clean energy rather than follow he further added  “With 21 GW of grid-connected new solar projects out in the market, India has signaled to the world that we’re ready to lead” he added.

Solar programme will not only ensure energy security to the country but also provide power to the last person at the bottom of the pyramid. Appreciating the awardees, the Minister said that such individual projects have a vital role to play in achieving holistic solar targets.

Goyal reiterated that Indian solar targets are achievable. He said that India have exceeded the solar targets by 116% this year in comparison to last year and already had awarded projects of 11,000 MW. The awards were given to various stakeholder groups including State Nodal Agencies, Manufacturers/Suppliers of the technology and a wide range of beneficiaries to recognize their achievements made in the sector.