Home » News » India Remains Committed to Climate Change as Per Own Values and Requirements: G20 Summit

India Remains Committed to Climate Change as Per Own Values and Requirements: G20 Summit 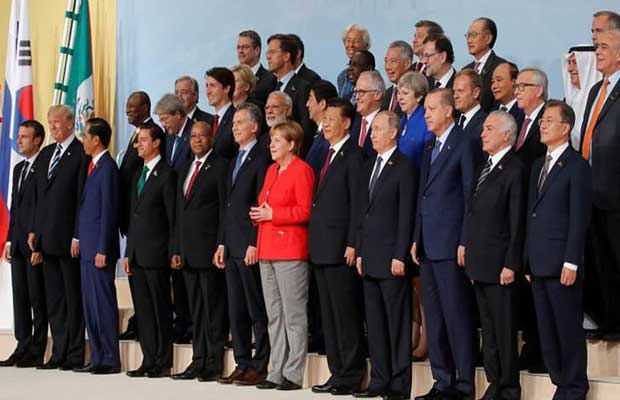 India to be committed to issues of climate change as per its own values and requirements, though will need some more time to process entirely to clean fuel.

India has said that it remains committed on the issue of climate change “as per its own values and requirements”; days after the US announced its decision to pull out of the landmark Paris agreement. External Affairs Ministry spokesperson Gopal Baglay said that the focus of the Indian government is on International Solar Alliance (ISA) and other methods of renewable energy.

Arvind Panagariya, Sherpa for India at the G20 Summit, said at the same media briefing that India would need “more time” to process completely to clean fuel.

He said that the US position on climate change “remained different” from that of other countries as it wants inclusion of fossil fuel.

“Our stand has been very clear that what we are committed on climate change as per our own values and more importantly in terms of our own requirements,” Baglay said when asked about the key takeaway for India on climate change at the Summit.

Baglay said solar energy and other renewables are the areas that have been in focus of Prime Minister Narendra Modi’s conversation with other global leaders at the Summit.

Speaking on the issue of the US’ stance on climate change, he said that “there were differences but nobody was isolated, though Europeans had much stronger position”.

“India’s position remains that we need more time to process completely to clean fuel. US position on climate change remains different from that of other countries and it wants inclusion of fossil fuel,” Panagariya said.

Prime Minister Modi, while speaking at the meeting of BRICS leaders, on the sidelines of the G20 Summit yesterday had said that it was “mandatory” to implement the consensus of the Paris agreement on climate change.

He had asserted that India will implement the accord in “letter and spirit”.

President Donald Trump had recently announced that the US will withdraw from the Paris climate accord, saying the deal agreed by more than 190 nations unfairly benefited countries like India and China.

The objective of the Paris Agreement is to prevent an increase in global average temperature and keep it well below 2°C. The Agreement was adopted on December 12, 2015, by 195 parties to the United Nations Framework Convention on Climate Change (UNFCCC), replacing its predecessor Kyoto Protocol. It was finally ratified on November 4, 2016.

Tags: India, International Solar Alliance, Solar Energy
"Want to be featured here or have news to share? Write to info[at]saurenergy.com