India and Bahrain have agreed to collaborate in the solar energy sector after comprehensive talks were held to give a major boost to bilateral relations. 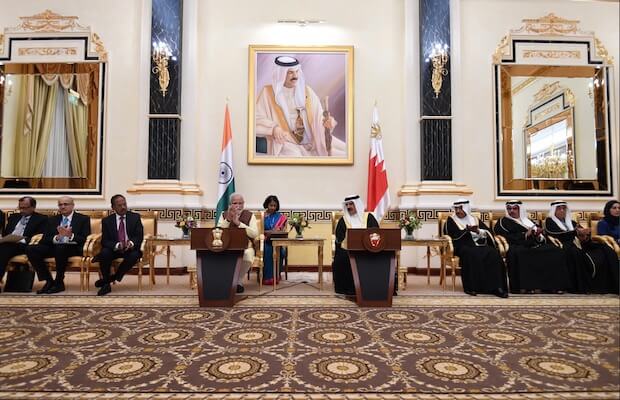 India and Bahrain on August 24, 2019, agreed to collaborate in the solar energy sector as Prime Minister Narendra Modi held comprehensive talks with his Bahraini counterpart Prince Khalifa Bin Salman Al Khalifa to give a major boost to the entire spectrum of bilateral relations.

As part of the exchange, the two nations have also signed agreements for the collaboration in the areas of space technology and culture exchange programs.

Modi, the first Indian prime minister to visit Bahrain, and Prince Khalifa after the delegation-level talks witnessed the exchange of MoUs in the areas of culture, space, collaboration with International Solar Alliance (ISA).

The two sides agreed on the collaboration of the kingdom with ISA. The ISA, launched in 2015 by Modi and then French President Francois Hollande at the UN Climate Change Conference in Paris, is a major global initiative for contributing to the implementation of the Paris Climate Agreement through rapid and massive deployment of solar energy.

“Honoured to have met HH Prince Khalifa Bin Salman Al Khalifa, Prime Minister of the Kingdom of Bahrain. Our talks were comprehensive and included a wide range of subjects concerning India-Bahrain relations,” Modi tweeted after the talks.

Both leaders expressed their commitment to giving a boost to the entire spectrum of bilateral relations.

In April, the Union Cabinet, chaired by Modi, had given its approval for a Cooperation Agreement between Ministry of New and Renewable Energy (MNRE) of India and Ministry for Energy, Utilities and Climate of the Kingdom of Denmark on strategic sector cooperation in the field of Renewable Energy with a focus on Offshore Wind Energy.

The areas of cooperation would include technical capacity building for management of off­shore wind projects, measures to develop and sustain a highly efficient wind industry, onshore as well as offshore; measures to ‘ensure high quality of wind turbines, components, and certification requirements; forecasting and scheduling of offshore wind.

In March, the Cabinet was apprised of the MoU between India and Tajikistan on cooperation in the field of renewable energy. The MoU was signed on October 8, 2018. The agreement was signed to establish a basis for a cooperative institutional relationship between India and Tajikistan to encourage and promote bilateral technical cooperation in new and renewable energy on the basis of mutual benefit, equality and reciprocity.