Home » News » In Renewables, it’s No Less Than a ‘Revolution’ Underway in India. WSDS 2019

In Renewables, it’s No Less Than a ‘Revolution’ Underway in India. WSDS 2019

At the World Sustainable Development Summit, India’s renewable push came up for appraisal, with everyone agreeing that it was no less than a revolution when seen from most metrics. 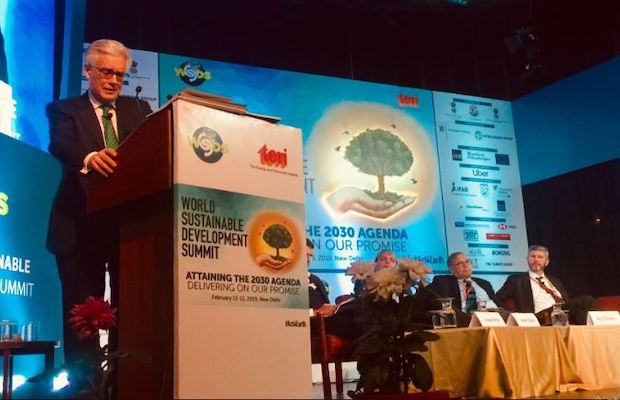 At a panel chaired by Ajay Shankar of TERI, Anand Kumar, Secretary, MNRE, Vineet Mittal of the Avaada Energy Group representing the private sector, David Nelson of the Climate Policy Initiative for a view on energy finance and Lord Adair Turner, Chair of the Energy Transitions Group, the mood was distinctly upbeat,  with clarity on the challenges faced by Renewable energy, now that it is quite simply a mainstream option, not an investment for the ‘future’.

The panel started off with a special video message from Rachel Kyte, CEO of Sustainable Energy for All, and a Special Representative of the UN Secretary-General for Se For All. Kye expressed the hope that the progress on the RE front was more a cause for guarded optimism than anything else.

Ajay Shankar set the ball rolling by recalling how, as recently as 2010, India had set itself a target of 20 GW by 2020 in renewables, it was seen as a rich country pursuit. Today, with the country already at 76GW of capacity, and still focused on reaching 175GW by 2022, and possibly 500 GW by 2030, it was nothing less than a revolution.

Anand Kumar, Secretary, MNRE spoke about how the energy transition today was the biggest disruption underway for the country and the world. Speaking about the many policy initiatives the government had taken, he also acknowledged that India was looking not to repeat the mistakes it had made earlier. He specifically spoke about manufacturing, where despite every effort, manufacturing in India has been stifled by Chinese competition, making it clear that the next big challenge, storage, was one where the government was very keen to ensure a robust base for the country. Hailing the role of private investment, he mentioned how 30 GW  of solar and wind would need to be tendered out every year from now to reach the target of 500 GW by 2030. Thus establishing a clear trajectory for the industry.

The two biggest challenges for the RE sector, namely land and transmission infrastructure are under active consideration, with state governments being roped in to enable a simpler process for land acquisition by pooling etc, and higher investments in a modern transmission grid. Pilot projects with distributed solar projects are on at village level, which will help the government identify bigger opportunities globally, be it through the International Solar Alliance (ISA), or otherwise.

Lord Turner shared his perspective on how renewables would be making a massive impact, sooner rather than later, with many developed economies looking to cross the 50% mark and much higher, by 2025 itself, as the relentless drop in solar, wind and storage prices accelerate plans. In this, he hinted at opportunities for countries like India, which, by virtue of sheer size and population are set to have a massive impact on climate change with their policies. Be it the efforts being made on the cooling front, where India has started pushing out plans to ensure in a warming world, demand for cooling does not overwhelm other efforts to prevent emissions.  Together with their members and supporters, which include the Tatas and Dalmia cement in India, he was hopeful of the world exceeding on its Paris targets, to enable a zero carbon economy what would also deliver the increase in energy supply that a country like India or China still needs. With demand going from 23 TW hours to 80 TW hours by 2060, technology innovations would need to step in to ensure electricity can be decarbonized.  He declared that rather than 40% capacity,  45% generation was possible by 2030 for India, based on their latest report’s vision document.

Vineet Mittal of Avaada Energy minced no words in discussing the need for a better understanding, and the challenges faced by the private sector in executing India’s massive renewables push. A job it has done admirably in a competitive market environment so far.  Highlighting how the industry was fortunate to have a higher purpose handed to itself in this case, be it its contribution to arresting climate change or even conservation of the environment to serve society. He questioned the need to look out for solutions when our challenges were at a scale not seen elsewhere.

Giving the example of the top 10 polluted cities globally being in India, he stressed on the need for a much higher urgency in our perspective, especially when it comes to comparing renewables with the mainstay of the generation so far, thermal.  He claimed that thermal subsidies were actually much higher than believed, by quoting how Coal India supplied coal to thermal plants at 1200 per tonne, even as other industries were provided coal through e-auctions at 2500, the price last week.  Thus, there was a huge implicit subsidy being given to thermal generation in this country, in the ‘lakhs of crores’.  Vis a vis that, renewables have barely got budget support worth a few hundred or a thousand crores, and the sector today actually operates by bidding on reverse auctions. This policy disconnect needed to be addressed, by backing words with action.

Asking for a level playing field, Mittal pointed out the need to look at a massive area like captive power, that is close to  80,000 MW today. He wondered why this huge sector, using mostly coal and fossil fuels inefficiently thanks to a smaller scale, cannot be given a sunset clause that asks them to shift to renewables by say, 2015.  Not only would this give a fillip to renewables, but it would also ensure cleaner energy at a competitive cost today.

David Nelson of CPI spoke about the financing options coming up for funding renewables, with special stress on the huge challenge of funding a grid that can handle the variability of renewable power. His key takeaway was that financing was becoming more accessible, but also on the need to look at managing existing demand smartly, be it shifting agricultural demand to ‘lean’ hours, or even manufacturing, areas that had not been explored adequately when costing grid enhancement costs so far.