Home » News » In A First For The World, Auckland Ports Welcome a Full-Sized Electric Tugboat

In A First For The World, Auckland Ports Welcome a Full-Sized Electric Tugboat

In a moment that will go down in history, Ports of Auckland have become home to world’s first full-size, ship-handling electric tugboat named Sparky. 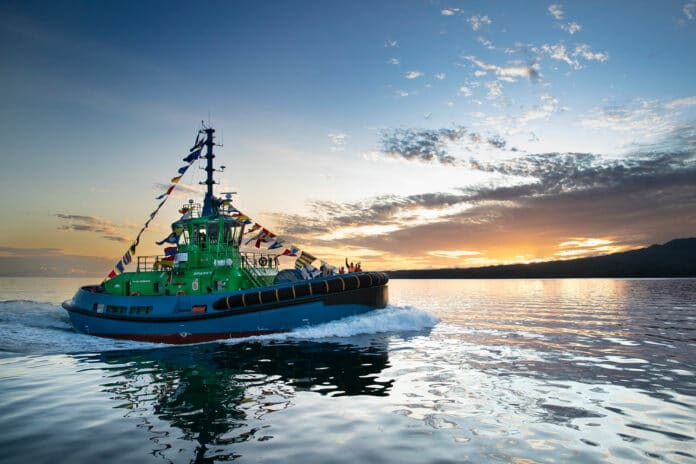 This electrification is will save close to 465 tonnes of CO2 in diesel emissions every year. At the same time, the tug will help save big on operational cost since it is less than a third of a diesel equivalent. The battery operated e-tug boasts of a recharge time of just two hours, allowing for four shipping moves on one charge from a total of 2,784 kWh of power. That apart, Sparky also has an impressive 70-tonne bollard pull.

In order that the safety is not compromised on, Sparky has a pair of 1000kW backup generator sets to be used only in cases of emergency.

Roger Gray, CEO of Ports of Auckland, expressed excitement about the pathbreaking development, “Her (Sparky’s) arrival marks a big step towards the ports’ decarbonization of operations and towards our long-term emissions reduction goals.” Allan D’Souza, general manager, Marine and Multi Cargo at Ports of Auckland pointed out that because it is electric in nature, Sparky will neither produce smoke, nor sound unlike diesel tugs.

The e-tug will undergo a period of six weeks of testing before it becomes operational.