As the energy storage market rises, and as prices for storage continues to fall, more than 900 MW of energy storage grid-tied inverters were shipped globally in 2015. The global energy storage inverter shipment is forecast to surge at a compound annual growth rate of 38 percent, to 4.5 GW in 2020, according to IHS Markit, a world leader in critical information, analytics and solutions. 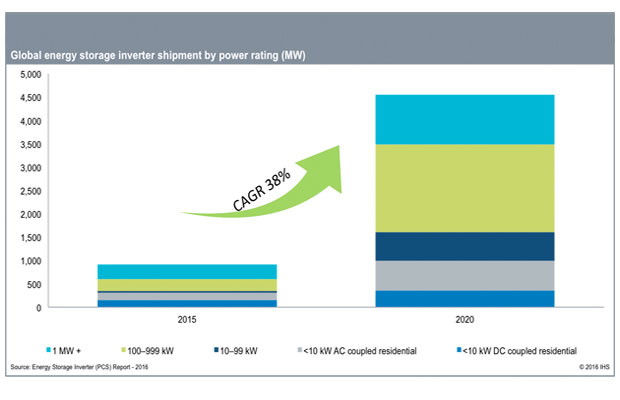 Prices for energy storage inverters will continue to fall an average of 13 percent per year, from 2016 to 2020.

“Recent inverter launches have the ability to distribute power flows between the network, the batteries, the load centers and generation assets,” Ni added further.

Products with a power rating less than 1 MW will capture 70 percent of cumulative grid-tied energy storage inverter shipments between 2016 and 2020. In particular, nearly 40 percent of inverter shipments during the forecast period will have a power rating between 100 kilowatts and 999 kilowatts, as these products are utilized extensively in the utility-scale market, as well as playing a growing role in the commercial segment where average system sizes are quickly increasing.

“The sub-100 kilowatt inverters segment is highly competitive, about half of the shipments came from companies with a global market share of less than 5 percent,” Ni said.

“The large-scale energy storage inverter market, by comparison, is much more concentrated, with three manufacturers BYD, Parker Hannifin and Woojin Industrials representing half of the market.”