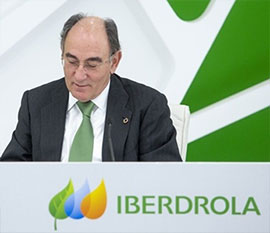 “After 20 years of anticipating the energy transition, our business model positions us as a key agent in the transformation of the industrial fabric. With our experience, our engagement with society and our financial strength, we are advancing a model for long-term sustainable economic growth capable of meeting the current challenges of society”

AN OPPORTUNITY FOR INDUSTRIAL FABRIC AND JOBS

Iberdrola launches a historic investment plan worth €75 billion euros for the period 2020-2025, with the aim of anticipating and taking advantage of the opportunities created by the energy revolution facing the world’s major economies. 90% of this investment volume – €68 billion – will be organic and will be aimed at consolidating its business model, based on more renewable energy, more networks, more storage and more intelligent solutions for its customers. The rest, €7 billion euros, corresponds to the recently announced acquisition of American company PNM Resources. This unprecedented rate of expenditure will represent an average investment of €10 billion per year between 2020 and 2022, and €13 billion per year in the period 2023-2025.

Iberdrola’s investment strategy -together with its efficiency policy- will continue to deliver profitable growth during the period, while maintaining its financial strength and shareholder remuneration. The group expects to obtain a gross operating profit (EBITDA) of €15 billion by 2025, which means an increase of €5 billion from 2019, with average annual growth of 7%. Net profit would amount to €5 billion, after growing annually by between 6% and 7% during the period.

The presentation of the outlook to 2025 has been used to review upwards the group’s outlook for 2022, despite the COVID-19 context. Thus, net profit in 2022 will be in the range of €4 billion to €4.2 billion, compared to the €3.7- €3.9 billion initially foreseen. Gross investment will rise by 35% to €50 billion, compared to the €38-billion forecast, and efficiencies will rise to around €1.6 billion, exceeding the €1.2 billion forecast and maintaining the rating at BBB+/ Baa1 levels.

VALUE CREATION, AN OPPORTUNITY FOR INDUSTRY AND EMPLOYMENT

Iberdrola’s investment programme for the next six years, the largest by a Spanish company, will contribute to boosting the industrial fabric and job creation in the countries where the group operates.

During the presentation of the plan for 2020-2025, Ignacio Galán, the Chairman of Iberdrola, explained that “after 20 years of anticipating the energy transition, our business model positions us as a key agent in the transformation of the industrial fabric. With our experience, our engagement with society and our financial strength we are advancing a model for long-term sustainable economic growth capable of meeting the current challenges of society.”

Iberdrola will maintain the social market economy and the United Nations’ Agenda 2030 as the cornerstones of its activity. Investments and procurement of goods and services from its more than 22,000 suppliers will contribute to sustaining up to 500,000 jobs worldwide by 2025. Also, nearly 20,000 new recruits will join the group during the period (more than 10,000 recruits and 30,000 jobs created by 2022).

The company, which in 2019 alone contributed €8.2 billion in taxes to the countries where it operates, expects its fiscal effort to rise to €12 billion in 2025, with the annual average for the period [2020-2025] being €10.3 billion, a direct consequence of the greater activity required to deliver the plan.

In a scenario of investment growth, shareholder remuneration will increase in line with results. The company has set up a growing floor of between €0.40 – €0.44 per share between now and 2025. The group will continue to implement its “Iberdrola Flexible Compensation” scheme with its corresponding buyback programmes, which avoid dilution of shareholders. The company maintains its dividend policy and the pay-out stays between 65% and 75%.

HALF OF THE ORGANIC INVESTMENTS, TO RENEWABLES, MAINLY IN SPAIN, UK AND USA

Iberdrola’s historic investment plan for the 2020-2025 period will be mainly aimed at renewables – representing more than half (51%) of organic investments, some €34.68 billion – and networks, which will account for 40%, approximately €27.2 billion. The customer area will receive 9%.

Investments are focused on countries with climate ambitions and an A rating. Investments amounting to €14.35 billion will be allocated to Spain, representing a 60% increase over the previous plan and 21% of the group’s total. In this market, more than €7 billion will go to renewables and more than €4.5 billion to networks.

The United States and the United Kingdom, for their part, account for €34 billion investment, 50% of the total. Other international areas are also being prioritized, with investments of more than €11 billion. 83% of total investment is aimed at countries with an A rating, in line with the company’s strategy of investing in this type of market.

Investments in renewables will enable Iberdrola to reach 60 gigawatts (GW) installed capacity in 2025, after hitting 44 GW in 2022. This will mean doubling current capacity while giving a major boost to offshore wind technology, with 4 GW at the end of the period. Offshore wind provides 5 times the EBITDA/MW compared to solar photovoltaic and 3 times that of onshore wind. The plan will also allow Iberdrola to grow in solar photovoltaic, with a forecast of 16 GW installed at the end of the period, and to reinforce its leadership in onshore wind and hydroelectric, with 26 GW and 14 GW installed in 2025, respectively.

To deliver this plan, Iberdrola starts from a unique position, with one of the largest renewable energy project pipelines in the industry; a total of 70.5 GW distributed over its traditional areas (reinforced this year with new markets such as Australia, Japan and Sweden) and key technologies: 30.7 GW being photovoltaic; 20.2 GW offshore wind and 16.3 GW onshore wind. Currently, the company advances installation of 7 GW and would have up to 11 GW under construction in 2025.

MORE INVESTMENT IN NETWORKS, 40% OF THE TOTAL, AND A GROWING CUSTOMER BASE

Energy networks continue to be considered by the group as a key factor in the electrification of the economy and the reinvigoration of the territories. Thus, together with renewables, Iberdrola’s model and strategy will continue to give weight to regulated assets. The company will allocate 40% of its organic investments to networks (€27 billion), bringing the group’s regulated asset base to €47 billion euros by 2025, 1.5 times its current value. This figure includes investments in transmission, which will reach €4 billion.

Iberdrola will continue to digitise its networks as a key element of smart grids that will ensure the massive incorporation of renewables. By the end of the period, Iberdrola will have installed more than 21 million smart meters and 83% of its assets will be in countries with an A rating.

The progressive electrification of energy uses will allow Iberdrola to increase its customer base. By the end of 2025, the company will have 60 million supply contracts worldwide. The company will offer intelligent and innovative solutions both to residential (energy storage and heat pump, self-consumption and electric mobility) and industrial customers.

Green hydrogen is becoming a strategic vector for industry. In line with European recovery programmes, the company plans to install 600 MW by 2025 (800 MW by 2027, together with Fertiberia) and produce 15,000 tons of renewable hydrogen. The first projects in Spain -in 2021 there will already be some capacity installed- will be completed with more initiatives in other countries, leading the development of a supply chain to support the implementation of new electrolyzer manufacturers while promoting alliances with other industrial groups.

Despite the unprecedented pace of investment that the group will maintain over the coming years, Iberdrola expects to keep its credit ratings at BBB+/ Baa1 levels and its current debt ratios, supported by its ability to generate higher cash flows. The company’s financial sources are strongly diversified, which allows easy access to different markets and active liquidity management of between €15 billion and €22 billion.

Iberdrola will maintain a flexible approach based on investment opportunities and financial ratios. In 2020, it has completed divestments of €4.6 billion – up from €3.5 billion scheduled for 2022 – and expects further divestments of around €3 billion between 2021 and 2025.

In the presentation of the operational and financial outlook for the period 2000-2025 and, in line with the climate objectives in its key markets, the company has a ten-year horizon to 2030 by which it would increase its installed renewable capacity to 95 GW -multiplying its current onshore and solar wind capacity by 2.5 and offshore by 4.5- and its regulated assets to €60 billion at the end of this period, with its client base growing to 70 million contracts and green hydrogen production to 85,000 tons.

ENVIRONMENTAL AND SOCIAL TARGETS IN A CHANGING GLOBAL ENVIRONMENT

Over the past 20 years, Iberdrola has gone from being a local utility to becoming a global clean energy leader, with a fourfold increase in renewable capacity, growing EBITDA five times, net profit four times and a six-fold increase in market capitalization while reducing all along its CO2 emissions by 75%, closing its coal plants and multiplying by three its shareholder remuneration. All of this was accompanied by an in-depth process of geographical diversification and strengthening of balance sheet.

Thus, Iberdrola is in a unique position to tackle the global energy revolution, focusing on countries with ambitious climate and energy targets – this is the case of Europe as a whole, Brazil, the United States, Australia and Japan – and solid commitments to reducing emissions in the medium and long term, which will involve the commissioning of new renewable capacity, supported by more intelligent networks and backed up by storage systems.

In this context, by 2025, the company will continue to strengthen its environmental, social and governance (ESG) pillars. With CO2/kWh emissions already two thirds lower than the European average, the investment strategy in clean energy and networks will lead Iberdrola to become a “carbon neutral” company in Europe by 2030 and to reduce its global CO2 emissions by 86%, to 50g/kWh, by the end of the decade (70g/kWh by the end of 2025). As an additional contribution, the company will plant 20 million trees by 2030 (8 million trees until 2025).

Iberdrola will maintain its commitment to the creation of quality jobs and skills, increasing training hours per employee, which is already 4 times above the European average. It will also reinforce other commitments, such as gender equality – it raises its target to 30% of female managers from 20% today – and a pay gap of less than 2% by 2025.

Iberdrola will continue to implement best corporate governance practices, reinforce its cyber security actions and ensure that at least 75% of its suppliers have sustainability policies in place by 2025.