Iberdrola will build its next wind farm in Spain, 63 MW Herrera Complex, with the most powerful onshore wind turbines from Siemens Gamesa 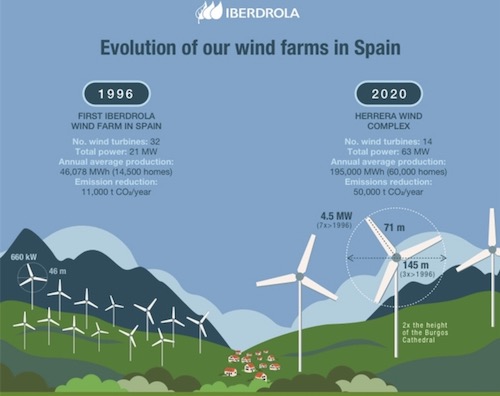 Iberdrola has announced that it will build its next wind farm in Spain, the Herrera Complex, with the most powerful onshore wind turbine, after awarding Siemens Gamesa the contract to supply the first SG 4.5-145 wind turbines, with a 4.5 MW power unit; which is almost seven times more powerful than the first wind turbines installed in Spain more than two decades ago.

The Herrera Complex, which will be built in Burgos province, is made up of three wind farms – La Huesa, Valdesantos and Orbaneja – and will have an installed capacity of 63 megawatts (MW), distributed between a total of 14 wind turbines. Forecasts indicate that the project will be operational this year.

The SG 4.5-145 wind turbine, with a new 71-metre blade and a diameter of 145 m, is three times bigger than the first wind turbines and twice the height of Burgos Cathedral. It also incorporates new technology to maximise energy production and the competitiveness of the installation making it a leading solution for medium-wind sites.

The Orbaneja and La Huesa wind farms will be located in the municipalities of Isar, Las Quintanillas, Rabé de las Calzadas and Estepar: the first one will consist of seven wind turbines, up to a total of 31.5 MW of installed power, while the second one will have four turbines that will add a further 18 MW. Valdesantos will be built in Estepar and will have three machines with a total installed capacity of 13.5 MW.

Iberdrola will also build the 10 MW-capacity Fuenteblanca wind farm in its vicinity, which will consist of 3 SG 3.4-132 wind turbines, to complete a 73 MW wind farm complex.

With the Herrera wind complex, Iberdrola is progressing with its renewables investment plan in Spain, where the company plans to install 3,000 new wind and solar MW. By 2030, company forecasts point to the installation of 10,000 new MW. These actions will enable jobs to be created for 20,000 people.

At present, and with these processes underway, Iberdrola’s projects under construction or in the pipeline – wind and photovoltaic – in Spain total more than 4,000 MW in regions such as Extremadura, Castilla-La Mancha, Castilla y León, Navarra, Aragon, Andalusia, Murcia, Cantabria and Andalusia.