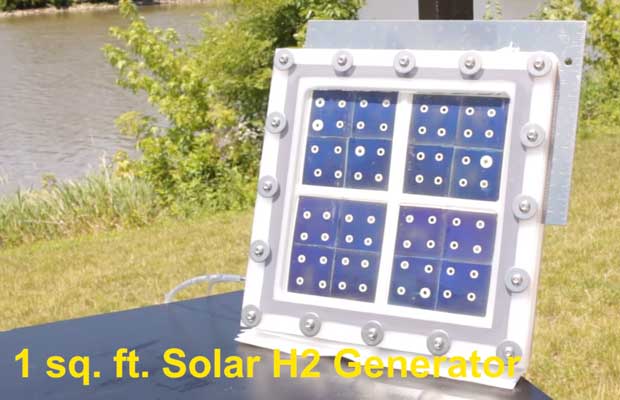 HyperSolar has announced the successful integration of a low-cost hydrogen catalyst into its solar hydrogen production device. HyperSolar approached Professor Jong-Beom Baek and his research group at Ulsan National Institute of Science and Technology (UNIST) in South Korea after reviewing “An efficient and pH-universal ruthenium-based catalyst for the hydrogen evolution reaction,” published in Nature Nanotechnology in February 2017. Baek and his team developed a catalyst comprised primarily of ruthenium (10 weight %), carbon and nitrogen that can function as well as platinum, the current catalyst used for hydrogen production, but at a 20x reduced cost.

HyperSolar integrated this ruthenium-based catalyst for hydrogen evolution (video link here) with its proprietary low-cost catalyst for oxygen evolution onto a triple junction silicon solar cell.  The HyperSolar device clearly demonstrated the production of copious amounts of hydrogen and oxygen bubbles under water within a minute of exposure to simulated sunlight.

Platinum is currently the best-known catalyst for hydrogen evolution.  However, the price of platinum is very high due to its scarcity and difficult mining process. Using a low-cost catalyst comprised chiefly of earth abundant elements (90% is carbon and nitrogen) to replace platinum will significantly lower the hydrogen production cost, thus resulting in a reduced hydrogen fuel price for consumer and commercial applications. With this breakthrough, HyperSolar’s preliminary techno-economic analysis projects that the levelized cost of hydrogen from Hypersolar’s device could be competitive with current industrial hydrogen made from the steam reforming of natural gas.

“The concept of a hydrogen economy, or even mainstream hydrogen applications, has always been considered the holy grail of clean energy,” said Tim Young, CEO of HyperSolar. “I’m very proud of our team for continuing to hit milestones that bring us closer to commercial viability. By systematically lowering the cost of major components, such as solar cells and catalysts, we believe that the hydrogen economy is possible. Our next steps will be to further explore other properties of the catalyst, such as long-term stability under water with high salinity, as the best fit for our application.”