A novel photovoltaic-powered electrolysis device which can operate as a stand-alone platform that floats on open water is discovered by the researchers from Columbia University in the US. 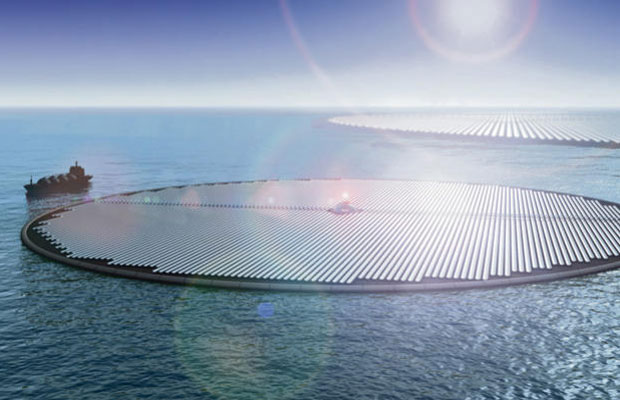 Floating solar cells competent of utilizing sun energy to produce hydrogen fuel from water have been developed by the scientists. Currently, NASA’s space program is using hydrogen as a source of clean fuel, the recent development will be playing a pivotal role in shaping the sustainable energy future.

Natural gas is used widely for the production of hydrogen by a process called steam methane reforming which concurrently releases carbon dioxide (CO2), yet uses water electrolysis with electricity from solar photovoltaic (PV) offers a encouraging route to generate hydrogen without any CO2 emissions association.

A novel photovoltaic-powered electrolysis device which can operate as a stand-alone platform that floats on open water is discovered by the researchers from Columbia University in the US.

The floating device can be thought of as a “solar fuels rig” bearing some resemblance to deep-sea oil rigs, besides it would produce hydrogen fuel from sunlight and water instead of extracting petroleum from beneath the sea floor, researchers mentioned. State-of-the-art electrolyzers use expensive membranes to maintain separation of these two gases.

The new device relies instead on a novel electrode configuration that allows the gases to be separated and collected using the buoyancy of bubbles in water. The design enables efficient operation with high product purity and without actively pumping the electrolyte. Based on the concept of buoyancy-induced separation, the simple electrolyzer architecture produces H2 with purity as high as 99 per cent.

Daniel Esposito, assistant professor of chemical engineering at Columbia University said “The simplicity of our PV-electrolyzer architecture – without a membrane or pumps – makes our design particularly attractive for its application to seawater electrolysis, thanks to its potential for low cost and higher durability compared to current devices that contain membranes.”

“We believe that our prototype is the first demonstration of a practical membraneless floating PV-electrolyzer system, and could inspire large-scale ‘solar fuels rigs’ that could generate large quantities of hydrogen fuel from abundant sunlight and seawater without taking up any space on land or competing with fresh water for agricultural uses,” Esposito added.