A new research note by India Ratings and Research (Ind-Ra) believes that upcoming wind-solar hybrid auctions will spark cautious optimism among independent power producers. Technical complexities related to grid integration and inclusion of floor capacity proportion of wind projects (at least 33 percent of the total contracted capacity) in the hybrid mix could weigh on the project economics and tariffs assumption. On the contrary, standalone renewable auctions (especially solar) are likely to garner higher interest on account of developing comfort around photovoltaic technology, improving in panel efficiency, lower volatility in generation, increasing economies of scale and decreasing operating costs.

The report believes that the complexities currently surrounding hybrid projects are despite the recently issued competitive bidding guidelines that address many of the issues hampering the growth of hybrid projects in the past. However, the authors do see the guidelines as a positive in the long run. 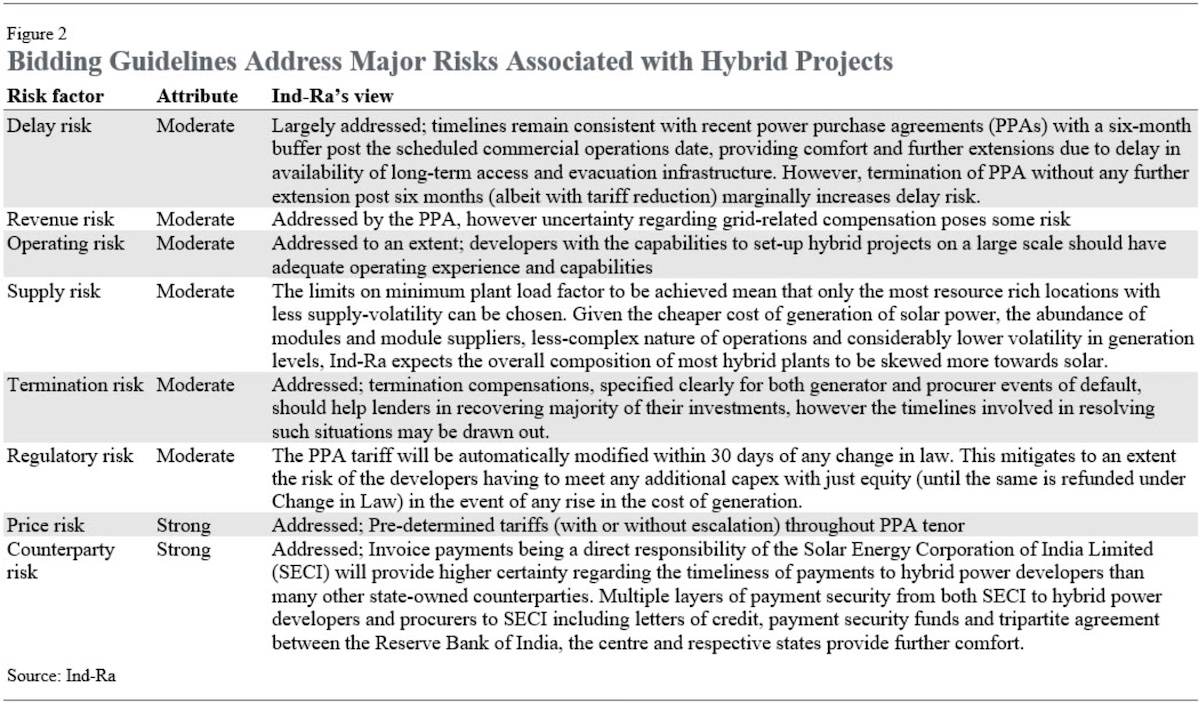 The report then goes on to view the impact of some of the key clauses of these guidelines and their ability to address key risks associated with renewable projects as follows:

Must-run Status a Positive but with a Caveat:

While hybrid projects will enjoy the must-run status and shall be eligible for compensation at PPA tariff for any grid backdown, no generation compensation will be applicable if backdown is on account of grid safety. This caveat keeps hybrid projects exposed to the risk of permanent loss of revenue due to grid curtailment on occasions. It details that renewable projects in Ind-Ra’s portfolio have not received any grid compensation payments until now (matter pending at various courts in some cases). Projects in a number of states including Andhra Pradesh, Telangana and Karnataka have been facing curtailments over the past couple of years without any compensation for the loss of revenue. The hybrid bidding guidelines have not entirely addressed this risk in the agency’s view, given the litigation delays and possible curtailment quoting grid safety-related issues.

The recent solar tenders have been oversubscribed with the past five standalone solar tenders (since August 2019, excluding manufacturing-linked capacity) floated by SECI, receiving aggregate bids of 15.43 GW for tenders of 6.67 GW. On the other hand, wind auctions have been relatively less frequent of late with the recent SECI standalone wind auctions remaining considerably undersubscribed. The last five standalone wind auctions conducted by SECI have seen aggregate bids of 8.6 GW for tenders of 7.4 GW. However, the last two of these auctions, viz. tranches VII and VIII were undersubscribed by almost 62 percent, i.e. bids were received for 1.15 GW against tendered capacity of 3 GW.

Solar tariffs have been continuously falling with the SECI auction in November 2020 witnessing the lowest tariff bid of Rs 2/kWh, 15.3 percent lower than the lowest bid discovered in the previous SECI auction a few months ago. This steep fall in tariff is likely to have been caused by a number of factors including the end of safeguard duty on imported solar modules by July 2021, falling module prices and falling interest rates. Whether tariffs can sustain at this low level, remains to be seen. The introduction of increased basic customs duty affecting imported module prices could again see a tariff pick-up to earlier levels.

Round-the-clock renewable power would be vital if the country has to increase its dependence on renewables and meet the ambitious target of achieving 450 GW of renewable energy by 2030. Hybrid power, whether a combination of just renewables or an optimal combination of renewables backed by conventional power, is surely a step in the right direction. While the initial response to hybrid power auctions had been muted, the authors of the report expect the interest to pick-up as more developers become comfortable with both solar and wind.

Especially, if SECI decides to push hybrid projects more and standalone solar and wind tenders become less frequent, developers will have to adapt or lose out. Also, if storage backed renewables is the future, then storage required for hybrid plants would be lower than that of standalone solar or wind, thus reducing the investment required in storage. However, it may take some time before the tariffs discovered during hybrid projects bidding come near to the tariffs discovered during recent solar auctions (as low as Rs 1.99/kWh).