In his reply to a question on solar power production across states, R.K. Singh, the minister for Power, News and Renewable Energy and Skill Development and Entrepreneurship, shared some very interesting data in parliament yesterday. 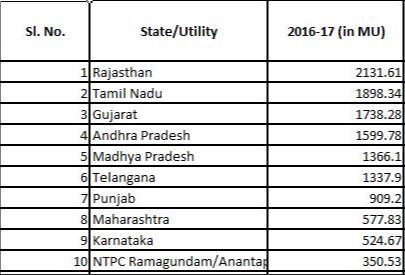 As we can see, Karnataka goes roaring upto the no. 1 rank, from no. 9 in 2016-17. Its a ranking it will probably retain by the end of the year too. Andhra Pradesh, which has retained its no. 4 ranking, should be  cause for worry, with Tamil Nadu providing a much better environment for developers. Of course, Uttar Pradesh, which has moved from production of 230 million units to 1192 in 2018-19, is the other state that would have surprised observers, with its massive jump. And continued potential to keep moving up.

At one level, these numbers certainly tell the story of solar production (as per government records) since 2016, when the industry truly took off in a big way. A 290 percent jump in production between 2016 and 2018-19 only underscores the massive investments and their impact across the leading states. Of course, large regions like the North East, Jammy and Kashmir, Himachal Pradesh, or large states like Bengal and Bihar remain laggards, with production that can improve exponentially.

The Hill states in particular could perhaps take a leaf out of Uttarakhand’s book, where solar production has moved from 37.7 million units in 2016 to 183 million units  by September this year.