The Norwegian company accounted for just over 20 percent of the market share, or more effectively every fifth wind turbine installed in the last year was manufactured by Vestas. 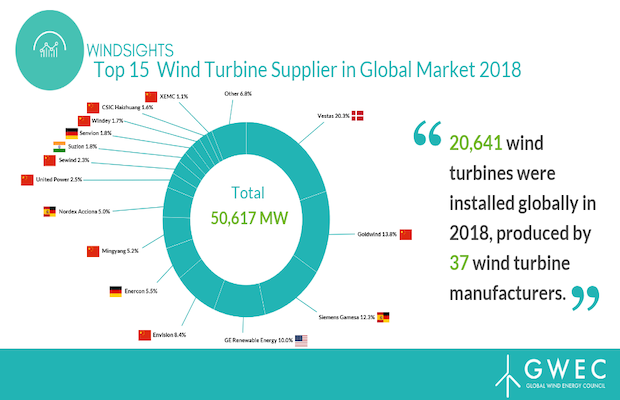 The Global Wind Energy Council (GWEC) has published the first edition of its annual Global Wind Market Development – Supply-Side Data 2018. According to the report, 20,641 wind turbines were installed globally in 2018, with a combined capacity of 50,617 MW.

The market was held predominantly by 15 major players of the sector, and over half of these top 15 turbine manufacturers are based out of China.

Vestas held the title as the world’s largest turbine supplier in 2018, due to its wide geographic diversification strategy and strong performance in the Americas. The Norwegian company accounted for just over 20 percent of the market share, or more effectively every fifth wind turbine installed in the last year was manufactured by Vestas.

China’s Goldwind moved up one position, replacing Siemens Gamesa in second place after its domestic market share increased by 5.1% in 2018. Siemens Gamesa lost its place primarily due to lower installation in the UK, Germany, and India in 2018.

GE Renewable Energy retained fourth place by taking advantage of stronger performance in the US market, where it recaptured the title as the No.1 supplier. Envision replaced Enercon in fifth place, mainly due to its strong growth in China and the sharp drop of installations in Enercon’s domestic German market in 2018.

India’s Suzlon dropped out of the top 10 turbine supplier ranking in 2018, primarily a result of reduced installations, by up to one third, in its home market. Senvion fell three positions to 12th, with new installations in Germany in 2018 halving compared to the previous year. Boosted by strong growth in the Chinese market, Mingyang, United Power and Sewind moved up to take up the spots vacated by Suzlon and Senvion.

The report also highlighted that in the technology side geared wind turbine systems remained the preferred choice of wind turbines. The market share of conventional high speed geared systems and medium speed turbines increased to 69.7% and 3.7% respectively in 2018, while the market share of direct drive wind turbine dropped nearly 2% to 26.6% in 2018, primarily due to the reduction of wind turbines installed by Germany’s Enercon in 2018. The No.1 suppliers in each of the three technology categories (high-speed geared drive, medium speed geared drive and direct drive) in 2018 were Vestas, Mingyang, and Goldwind respectively.

Ben Blackwell, CEO of GWEC said, “The fact that tier one suppliers gained greater market share in a year when the new installation declined by 3% reinforces that leading global suppliers’ hard work, focusing on product innovation and value-added solutions, has finally paid off. While there are 8 Chinese manufacturers included in the top 15, the picture changes dramatically when sales in the domestic Chinese market are excluded. Aside from Goldwind, none of the Chinese suppliers installed sufficient new wind capacity in the overseas market for any to be included in the top 10 rankings in 2018.”