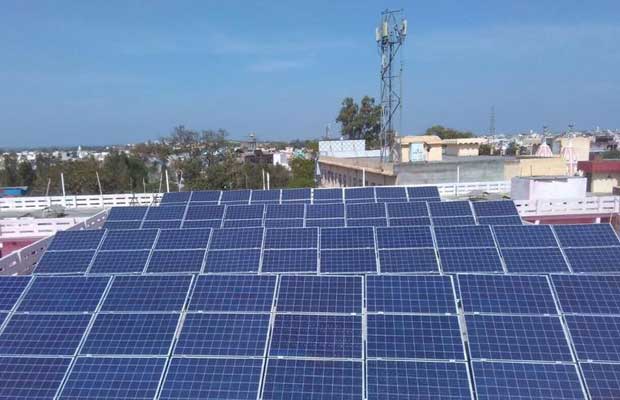 Gurjar Sudhaar Sabha‘s dharamshala in Kurukshetra inspired by the prospects of solar energy has install a solar plant in the area.  The installed solar panels power a total of 250 rooms in Gurjar Sudhaar Sabha Dharamshala. Out of 250 rooms there are 25 AC rooms, 45 rooms with coolers, 16 hall type rooms, and rest are ordinary rooms. Along with that, there are 5 store rooms and 3 big halls. The plant runs the electrical load of 45KW.

This was made possible due to the initiative of Department of Renewable Energy, Government of Haryana in collaboration with Su-Kam. One 30KW grid-tie inverter with 30KW solar panels along with a net meter was installed in the area. The entire process was subsidized by the Haryana government. The grid-tie inverter generates about 150 units of solar power depending on weather conditions. The product enables the user to feed back the excess solar power generated from the plant to the grid and earn money. As compared to an off-grid system, a grid-tie system also provides freedom from battery maintenance making essentially a one-time investment and a lifetime of advantage.

“Solar power holds great potential. Not only it is conducive to environment, it is pocket –friendly too. There has been a sharp decline in our electricity bills ever since we have installed this solar power plant. I am thankful to the government and Su-Kam for introducing us to the Solar power which has changed our lives for better,” said Gyan Singh Advocate, Pradhan, Gurjar Sudhaar Sabha.

“Solar energy is India’s future. It is eco-friendly, yields 24×7 electricity and is a true value for money. Su-Kam appreciates the Gurjar Sudhaar Sabha’s decision and hopes that more and more establishments will go solar,” said Kunwar Sachdev, Managing Director, Su-Kam.