Gujarat can Lead the Renewables Race in India: Report

A new report has predicted that in a race to be the top state in India, Gujarat could and perhaps will outdo all other states with the addition of a staggering 46 gigawatts (GW) of new renewable energy capacity by the end of the next decade (2029/30).

The Institute for Energy Economics and Financial Analysis (IEEFA) identifies Gujarat as one of five leading Indian states for renewable energy in terms of both existing generation capacity as well as future potential in its new report  ‘Gujarat’s Electricity Sector Transformation – A Role-model of India’s Electricity Transition’.

Tim Buckley, co-author of the report and IEEFA’s director of energy finance studies said the Indian government has rightly identified the need to reduce its exposure to imported fossil fuels including oil, coal and gas, setting the stage for a massive transformation across the country.

“The government knows an over-reliance on imported fuels adversely affects India’s trade account deficit and puts the country’s energy security at risk. Setting an ambitious new renewable energy target of 523 GW by 2030 is a clear indication by the central government of the direction the states must pull towards.”

The report notes that Gujarat has incurred the cost of the recent bailout of its “unviable” imported thermal coal capacity at Mundra. “Refocusing efforts on continuing its already promising renewable capacity additions would see the State come out on top as the country’s renewable leader,” said Buckley. 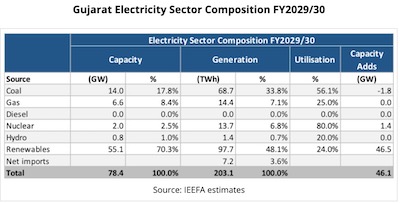 IEEFA models renewables additions of 4-5 GW annually to ensure all of Gujarat’s incremental demand going forward is supplied by renewables. This would be a dramatic shift in the state’s electricity sector composition, with renewables forming 70 percent of its capacity and 48 percent of generation by 2029/30.

The report notes that the incorporation of nearly 55 GW of intermittent renewable energy on Gujarat’s electricity network would require very active measures and investment on the grid integration and balancing front.

“Gujarat is already well in the race for building renewables capacity between states such as Tamil Nadu, Karnataka, Maharashtra, Andhra Pradesh and Rajasthan with similar renewable energy potential.”

Gujarat is also taking the leadership position in preparing for a significant investment in offshore wind as a step in cost reductions to be achieved over the coming decade. This will provide yet another domestic source of zero emissions generation capacity. Offshore wind also brings a strong diversification and more consistent year-round generation supported by utilisation rates of upwards of 50-60 percent.

“The state is in a position to transition rapidly away from unreliable, expensive, imported thermal power-based electricity sector to a lower-cost, low-emission, deflationary, domestic renewable energy-driven electricity system—perfectly aligned with India’s national objectives of building 523 GW of renewable energy by 2029/30,” said Shah. “It will require the state to stay on track and protect investor confidence through a strong and consistent policy framework.

“IEEFA is confident the state will continue to be one of the largest contributors to India’s world-leading renewable energy targets,” according to Shah.