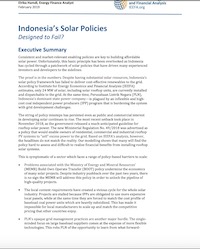 Consistent and market-relevant enabling policies are key to building affordable solar power. Unfortunately, this basic principle has been overlooked as Indonesia has cycled through a patchwork of solar policies that have driven many experienced investors and developers to the sidelines. The proof is in the numbers. Despite having substantial solar resources, Indonesia’s solar policy framework has failed to deliver cost-effective renewables to the grid.

According to the Institute for Energy Economics and Financial Analysis (IEEFA) estimates, only 24 MW of solar, including solar rooftop units, are currently installed and dispatchable to the grid. At the same time, Perusahaan Listrik Negara (PLN), Indonesia’s dominant state power company—is plagued by an inflexible and high-cost coal independent power producers (IPP) program that is burdening the system with grid development challenges.