Global thinktank for energy, Ember has published its most recent analytical report, which revealed that by August 2022, India has reached two-thirds of its 175 GW renewable energy goal for the year. Gujarat achieved this goal alongside Telangana, Rajasthan, and Karnataka. The majority of the shortage is made up of four states: Maharashtra, Uttar Pradesh, Andhra Pradesh, and Madhya Pradesh.

The data demonstrates that solar energy is spreading throughout India. With new solar installations up 22% in the first eight months of 2022 compared to those in 2017, the nation has seen strong solar growth. Solar accounted for 89% of this year’s new renewable energy installations.

Only 10% of new renewable energy (RE) installations so far this year have been wind-related, up just 7% from last year. From April 2022, the overall pace of renewable energy installations also slowed significantly, in part because of an increase in Basic Customs Duty. India experienced the lowest amount of new installations since June 2020 by July 2022, before increasing in August 2022.

This research revises a prior report from April 2022 and presents a new data tool that analyses the Indian states and union territories’ monthly progress toward their 2022 RE targets. The data tool makes use of the most recent data for August and the monthly state-by-state installed RE capacity data issued by the Ministry of New and Renewable Energy (MNRE). Four states are singled out in the report as having already reached their 2022 renewable capacity goals. Gujarat is the most recent state to have reached its 2022 RE target, joining Telangana, Rajasthan, and Karnataka, surpassing the targets in May 2022. In March 2022, Rajasthan surpassed Gujarat in terms of RE installations. Gujarat and Rajasthan are driving India’s transformation with  49% of  India’s new solar capacity being built in Rajasthan and 63% of India’s new wind capacity established in Gujarat in the first eight months of 2022.

Furthermore, if these states continue to report low installation rates, it will take them a considerable amount of time to meet their December 2022 goal: 20 years for Maharashtra, 80 years for Uttar Pradesh, 44 years for Andhra Pradesh, and 55 years for Madhya Pradesh. 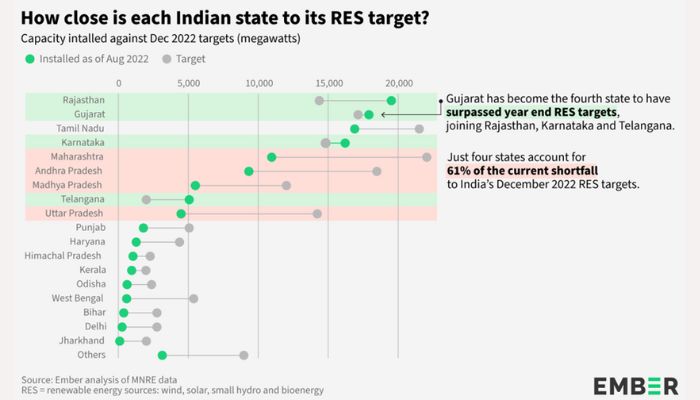 Aditya Lolla, a senior analyst for electrical policy at Ember, said, “India’s solar boom earlier this year shows how swiftly change can occur. Even a record RE capacity expansion of 3.5 GW in March of this year was the result of it. India must continually beat this March record to meet its lofty 2030 RE and non-fossil capacity ambitions.”