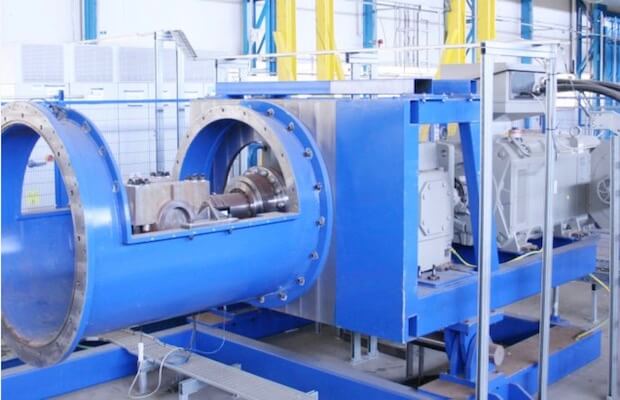 The concept design is expected to be market-ready by 2022, with prototype trials about to start at the UK’s Offshore Renewable Energy (ORE) Catapult R&D centre.

The PMG uses ferrites, which is an iron-rich ceramic for its magnets, against the current trend of rare earth metals, and is built around a modular architecture, making it scalable and easy to repair and maintain. The design prototypes and concepts have been calculated to be capable of cutting the capital cost of direct-drive generator by nearly a third, trimming almost 5 percent off the price of a turbine.

“Almost 95% of global rare earth market production originates from China and is in high demand from other rapidly expanding global industries such as batteries for electrical vehicles, defence, aerospace, medical, computing and mobile phones. The 2015 annual production of the rare earth elements neodymium and dysprosium, key components in the manufacture of the rare earth magnets, is estimated at only 35,900 tonnes and 1,902 tonnes respectively. By contrast, ferrite magnets are made from iron ore, an abundantly available material and it is estimated that worldwide reserves amount to 800 billion tonnes,” the company stated.

GreenSpur’s new technology addresses major issues facing the next generation of DD [direct-drive] PMGs by replacing high-price rare-earth materials with ferrites. Cutting the cost of PMG magnets from £40 ($50) a kg, down to around £1/kg.

The generator uses a modular structural design. Which means that it is constructed in stages, with a 15 MW offshore turbine created by loading 5 MW turbines in a stack. At present, the startup has modeled turbines reaching a maximum output of 17 MW by stacking three 5.7 MW units, with 22.7 MW output possible with the addition of another unit. The company is yet to test the upper limit for such arrangements but believes that 25 MW is a very feasible possibility in the near future.

The other key benefit of the modular design is that if one stage of the turbine fails, take for example a combined 9 MW design, then the other two stages of the turbine would continue to function and generating an output of 6 MW. Thus, reducing the urgency in reaching out to fix the faulty turbine.