The total capacity is distributed across two counties in the southwestern and southeastern parts of the state and provides enough low-cost, renewable energy to serve more than 35,000 EMC households. As a clean energy source, the solar portfolio’s environmental offset is equivalent to more than 350,000 metric tons of greenhouse gas emissions annually. 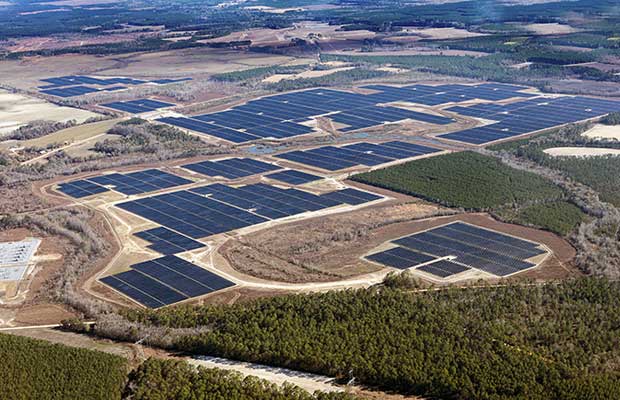 Lt. Governor Geoff Duncan said that the commissioning of this solar portfolio demonstrates the continued dedication of Georgia’s cooperatives in being leaders in renewable energy while making a positive difference in the communities they serve. “EMCs maintain a balanced and diverse portfolio to meet the energy needs of Georgia’s consumers – and that includes innovative sources like solar,” said Lt. Governor Duncan. “They’ve harnessed Georgia’s natural resources to power our homes, drive economic development, and provide hundreds of jobs in construction and installation.”

The three projects were commissioned on schedule and collectively complete the 200MWAC portfolio first announced by the partners in 2017. The three solar sites were developed, funded, and built by Silicon Ranch, which also owns, operates, and maintains the arrays throughout the lifecycle of each facility. Green Power EMC is purchasing all the energy and environmental attributes generated by the facilities on behalf of its Member EMCs for the next thirty years.

The first site, known as Hazlehurst III, came online in December 2019 and is a 40MWAC facility located in Jeff Davis County. In August 2020, Silicon Ranch commissioned the second site, the 74MWAC Terrell Solar Farm, in Terrell County. In December 2020, the partners commissioned the third and final site in the portfolio, Snipesville I, an 86MWAC facility also located in Jeff Davis County. The projects will contribute significant tax revenues for the two counties, which will benefit local economies, governments, and school systems for years to come.

Representative Gerald Greene, of House District 151 that includes Terrell and eight other counties, is proud that neighbors in his community helped build these solar projects. “The cooperatives’ commitment to South Georgia means our community develops expertise in solar,” said Representative Greene. “That means jobs, investments and long-term benefits for Terrell County, and our entire region.”

Thirty-two of Georgia’s EMCs share in the three facilities’ power production. By working together, Georgia’s cooperatives have been able to take advantage of economies of scale, resulting in lower-cost solar power – savings that are passed on to their member-consumers.

Representative Dominic LaRiccia, of House District 169 that includes Jeff Davis and two other counties, thanked Georgia’s cooperatives for their investment in rural communities across the state. “We recognize the dependency we have on energy and how important it is that it be safe, clean, affordable and dependable,” said Representative LaRiccia. “These solar sites help us keep energy costs low and at the same time bring in revenue to support school systems and also create jobs for families.”

“I appreciate the investment of Green Power EMC in our community, and communities across rural Georgia,” said Senator Blake Tillery, of Senate District 19 that includes Jeff Davis and ten other counties. “Their large capital investments create local tax revenues that fund our schools, roads and other infrastructure while providing clean energy for economic development projects across Georgia.”

“I am proud that Georgia’s EMCs are first in the nation among co-ops for installed solar capacity,” said Public Service Commissioner Tim Echols. “In fact, by 2022, they will be on target to complete more than one-third of the total solar capacity planned by co-ops in the entire U.S.”

“We are thankful for the opportunity to help our Members grow their renewable energy portfolio through innovative and cost-effective projects that will provide long-term benefits to the communities they serve,” said Green Power EMC President Jeff Pratt. “On behalf of our Member EMCs, I wish to thank our partners at Silicon Ranch for their work to deliver these world-class facilities right on schedule.”

“Silicon Ranch is honored by the confidence and trust that Green Power EMC and its Member EMCs continue to place in our company to execute on their behalf,” said Silicon Ranch Chief Commercial Officer Matt Beasley. “One of our guiding principles is that ‘we do what we say we will do,’ and we want to thank all of our project partners, including Green Power EMC, Georgia Transmission Corporation, and our friends in Jeff Davis County and Terrell County, for helping us to keep our promises and for enabling us to make these significant investments in communities across the state.”