PM Modi addresses several thousands of people at the grounds, who gathered for a mass recital of Soundarya Lahari, with the set of Shlokas of Indian philosopher Adi Shankaracharya.

Bangalore, Green energy like solar power would power India as 175 GW of electricity is expected to be generated from renewable sources, Prime Minister Narendra Modi said. 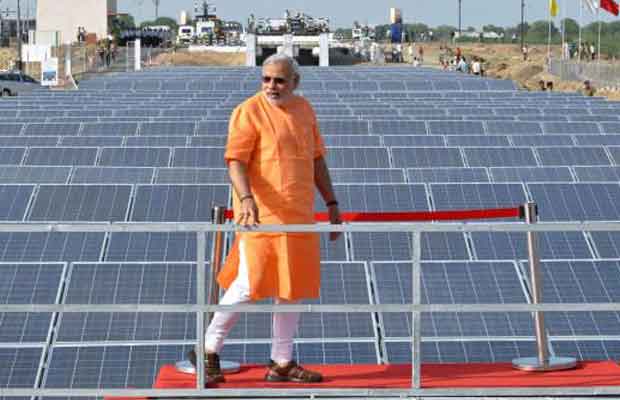 Modi said over Rs 11,000 crore were spent by our government in the renewable energy sector in the past three years, against a mere Rs 4,000 crore by the UPA. India is capable of generating a total 750 GW of energy if it puts all of its resources to work, PM said, adding: “We need to work towards that.” He said people could save hugely through over 27 crore LED bulbs distributed to households across the country as part of the Ujala scheme.”LED bulbs earlier cost Rs 350 and through Ujala scheme they cost just Rs 40-45. Around Rs 7,000 crore was saved in the country by this price cut. These bulbs also helped in cutting down the electricity bills for the households. With just a different approach, we could make a huge difference,” he said.

Green energy like solar power would power India as 175 GW of electricity is expected to be generated from renewable sources, Prime Minister said here on Sunday.”By 2022, when India will be celebrating 75 years of independence, 175 GW of renewable energy will be generated. The government is working towards meeting 40 per cent of the country’s energy needs from renewable sources like solar and wind by 2030,” said PM at a public function in the Palace Grounds here. He was addressing several thousands of people at the grounds, who had gathered for a mass recital of Soundarya Lahari, a set of shlokas (verses) composed by eighth century Indian philosopher Adi Shankaracharya.

Asserting that the future is not of diesel and petrol, Prime Minister said startups should look at innovations that help the country’s population. Through Ujjwala scheme, over three LPG connections part of Green energy revolution have been distributed to the poor in the country, he said. “This has contributed to a positive difference in the lives of the rural women, but also to give a way to a cleaner environment.” “Bangalore is the land of startups. I invite entrepreneurs to join in a movement in creating solar-based stoves that are inexpensive. Innovation should be in that direction that can help Indian population,” Modi said.