Home » News » Government to set up a pool of capital to fund research on green energy technologies: Piyush Goyal

Government to set up a pool of capital to fund research on green energy technologies: Piyush Goyal 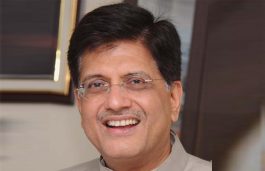 Minister of Power, Coal and New & Renewable Energy, Piyush Goyal delivering Keynote address on Tuesday at a conference on ‘The Future of Electricity’ said “the future of electricity in India rest on the pillars of affordability, sustainability and country’s energy security.”

India’s electricity consumption is going to increase fourfold from 1.1 trillion units to about 4 trillion units by 2030. Despite the massive roll out of energy efficient schemes, there is a possible 10% jump in the electricity growth annually for the next 15 or 16 years.

Indian Electricity sector, to my mind, is possibly the biggest business opportunity the world has to offer today said Goyal. He added “so India is a bright spot offering a huge trajectory of growth in the electricity consumption going forward”.

Talking about the fresh demand for power in India, the minister said “the fresh demand for power will come from the 230 million people who will get electricity for the first time, the elimination of diesel generation sets because of access to power and from increased economic activity coming from the Make in India campaign,” . The power consumption is expected to grow at 10% annually over the next 10-15 years and higher personal incomes and the emphasis given to domestic manufacturing activities will significantly increase power consumption despite the improvements in energy efficiency.

India has set a target of setting up 175 GW of renewable energy generation capacity by 2022, out of which 100 GW is to come from solar. Goyal said that solar power capacity, presently at 6.7 GW, will touch 20 GW by next year. Since the solar power sector is on track, the government will now focus on encouraging new hydropower and wind power capacity, he added.

Speaking at the conference on ‘The Future of Electricity’ Goyal said the Government will adopt new technologies to make coal-based power generation cleaner and also set up a pool of capital to fund research on green energy technologies with contribution from public sector companies, in which private enterprises could also take part.

Speaking about the environmental concerns, the minister said “India will couple maximum amount of Renewable Energy that we can feed into our grid with growing generation of coal based power, maintain that delicate balance to ensure the affordability of power and sustainability of generating and mixing this power and lastly also protect the energy security of the country.”