The Chinese solar PV inverter manufacturer GoodWe has today announced that it has received an order of 5,000 residential inverter units from the Germany-headquartered photovoltaic distributor, Krannich Solar. Hence, the firm will have to ramp up its residential inverter production.

With the COVID-19 situation easing across various states, EPC and installers have resumed their projects again to a normal level to meet pent-up demand.

“There is a huge sudden demand in the market due to uplifting of lockdown after a while. Also, there are ongoing tenders at the procurement and installation stage. To fulfill this demand, we need to plan a proper and continuous flow of goods in the market,” said Sandeep Banodiya, Sales Director of Krannich Solar.

Sungrow Partners With UCC for Distribution In Bangladesh
Also Read

He further added, “We are carefully reviewing the demand and supply situation and recalibrating our operations accordingly while protecting the interest of our customers and supplier”.

James, GoodWe Country Manager of India said, “GoodWe is ramping up its production of residential inverters to 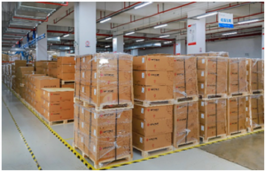 meet the demand of the Indian residential market”. He added that “We have recently received an order of 5000 Pcs of residential inverters from Krannich Solar, one of our biggest channel partners in the country.’

He added that “the company is optimistic about a faster market recovery and expects a demand to further increase. In parallel, the company is also preparing for the C&I and Energy Storage Solution sectors.”

Recently, GoodWe has joined the United Nations Global Compact (UNGC) as a leading renewable energy corporation and has expressed a determined intent to abide by the ten principles in environment, labor, human rights, and anti-corruption. The firm is a global MNC today, with a strong market presence across many countries.

Before that in June, GoodWe has announced a major manufacturing expansion to up to one million units per year in phase II of its Guangde manufacturing facility in China. The firm ranked as the leading storage inverter firm in the world by Wood Mackenzie has a strong presence across categories in solar.