Home » News » Global Solar Batteries Market Is Expected To Grow At A CAGR Of More Than 16% Through 2020: Technavio

Global Solar Batteries Market Is Expected To Grow At A CAGR Of More Than 16% Through 2020: Technavio 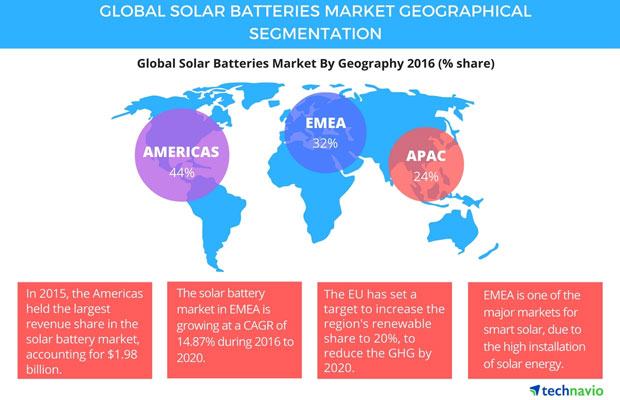 Technavio forecasts the global solar batteries market to grow at a CAGR of more than 16% through 2022 report.

According to the research firm the telecom sector will be one of the major factors that will have a positive impact on the growth of the solar power batteries market in the coming years. With the growth of the telecom sector, telecom companies have started installing new base transceiver stations (BTS) to support the rapidly increasing traffic. To provide better coverage, telecom operators have the need to install base stations at remote locations as well, which will demand the need for diesel generators due to unreliable grid connections. However, diesel generators account for almost 40% of the total operating expenditure and also lead to environmental pollution. This will induce telecom service providers to use hybrid power systems to power their base stations.  One of the major telecom companies, Bharthi Airtel has already announced to power about 40,000 telecom towers using hybrid batteries such as lithium-ion and solar hybrid.

One of the major trends that will gain traction in the solar power battery market in the coming years is the rise in deployment of microgrids says Technavio. A microgrid consists of a number of energy generation sources such as solar, wind, biomass, geothermal and fossil fuel generators and supplies power to a local community, a university, or even a military base. Since microgrids are more resilient than conventional grids, there will be an increasing installation of microgrids across the globe, especially in countries such as the US, Japan, Indonesia, and India. As microgrids require energy storage systems managed by an energy management system, this rise in installation of microgrids will consequently result in the growth of the solar batteries market.

The global solar battery market is characterized by the presence of well-diversified international vendors and domestic players who have a large portfolio of solar batteries. The market appears to be fragmented and since all vendors compete to gain maximum revenue shares, the market is highly competitive says the research firm. The major solar batteries manufacturers such as LG Chem, Samsung SDI, East Penn Manufacturing, GS Yuasa, and Exide Technologies dominate the market and mainly compete on the basis of product pricing, quality, and market presence. The market is highly susceptible to technical and financial challenges. To survive the competition, vendors have started concentrating on forming partnerships with automotive, industrial, and commercial companies. Though the need for high investment limits the entry of new players, the existing solar battery manufacturers have the need to effectively manage their sales, distribution, and working capitals to sustain the competition and increase their revenue shares.

According to the market study, Li-ion segment will account for the major shares and dominate this industry by the end of the forecast period. Li-ion batteries have high energy density and are commonly used in electronic devices such as laptops, smartphones, and tablets. Moreover, these batteries are highly efficient and provide an improved energy-to-density ratio, owing to which, there will be an increasing demand for Li-ion batteries to overcome power-interruptions. This in turn, will drive the growth of this market segment in the coming years.

The research firm also estimates that in terms of geographical regions, the Americas will be the major revenue contributor to the solar energy batteries market throughout the forecast period. This mainly attributed to the increased investments in smart solar and the growth in solar capacity and installations in the region. Analysts predict that North America will be the major contributor in this region, which will owe to the increasing support of the US government towards the installation of smart solar projects.