As the year 2017 nears to its end, GTM Research report has identified 13 countries of gigawatt-scale solar markets in 2018 that would exceed the 1-GW worth of annual solar PV installations, up from eight in 2017. 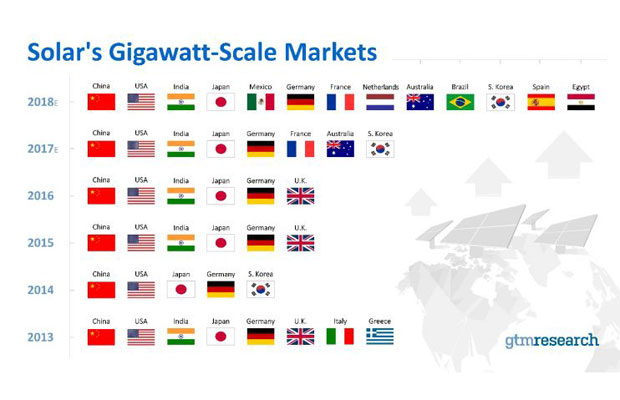 According to the GTM Research titled Global Solar Demand Monitor, the next five countries to cross the 1-gigawatt annual threshold will be Brazil, Egypt, Mexico, the Netherlands and Spain. In 2017 eight countries — China, the US, India, Japan, Germany, France, Australia and South Korea — will have installed at least 1 GW (gigawatt) worth of solar.

GTM Research said that European solar demand in 2018 will increase 35% growth in demand. According to the report, Spain will be at the forefront of the positive trend as its solar market is expected to surge to 1.4 GW from 40 MW in 2017, following its recent technology-neutral auction, which contracted 3.9 GW of photovoltaic (PV) capacity. The other European country to surpass 1 gigawatt in 2018 will be the Netherlands as the country has introduced Stimulation of Sustainable Generation scheme for a more recent boost.

Tom Heggarty, a senior solar analyst at GTM Research said, “The European market is entering a phase of sustainable growth, no longer driven by the feed-in-tariff boom and bust cycle.”

The report further highlights Latin American solar demand is expected to more than double in 2018. The report expects Egypt’s solar market to grow fivefold between 2017 and 2018, reaching 1.4 gigawatts.

“After a challenging few years following the initial award and subsequent cut of feed-in tariffs, over 1,500 megawatts of utility-scale projects in Egypt have now reached financial close, driven almost entirely by a large international development bank financing consortium led by the European Bank for Reconstruction and Development and the International Finance Corporation, which to date has committed nearly $2 billion USD in loans,” said GTM Research solar analyst Ben Attia. “We expect the majority these projects to be realized in late 2018 and early 2019.”