This MoU terminates GE’s exclusive supplier status on the two other projects carried out by EMF. 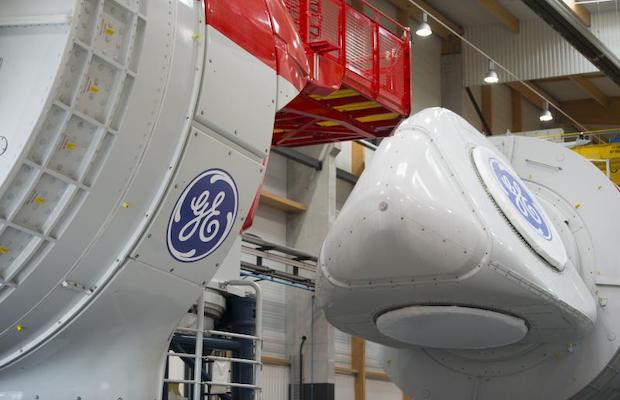 GE Renewable Energy has signed a Memorandum Of Understanding (MoU) with Eolien Maritime France (EMF) confirming its commitment to provide and service Haliade 150-6MW turbines to the first French EMF offshore wind farm to be cleared of any legal recourse.

This MoU terminates GE’s exclusive supplier status on the two other projects carried out by EMF.

Currently, the three projects developed by EMF off Courseulles-Sur-Mer, Saint-Nazaire, and Fécamp are still awaiting the last court decisions, following appeals against the administrative authorisations required for their implementation.

The cumulative excessive delays since 2012 on these projects, related to these claims, have significantly impacted the financial characteristics of those projects for GE Renewable Energy. GE has therefore decided to review its engagement in the implementation of all these projects.

EMF has since awarded the supply contracts for the other two projects to Siemens Gamesa.

Since the award of the three offshore wind farms to EMF in 2012, GE Renewable Energy has committed the necessary resources and investments to design and manufacture the turbines, with the installation of a dedicated engineering office in Nantes and the construction of its manufacturing plant in Saint-Nazaire, which has enabled GE to produce already more than 80 turbines for other offshore wind farms in Europe, Asia and North America.

In a technological market that has changed significantly in recent years, the company has chosen, while executing when the time comes to the remaining EMF project, to continue its contribution to the development of the offshore wind energy sector in France through an ambitious evolution towards a new generation of Haliade-X 12MW turbines.

Resources from Saint-Nazaire, Nantes, and Cherbourg will be mobilised in order to ensure the development and commercialization, then the delivery, of this new turbine.

Earlier this month, the clean energy firm was selected by Prowind GmbH to provide three Cypress units for the Elfershausen project in Germany. This marks the first order for the company’s Cypress platform, its largest onshore wind turbine in the field.