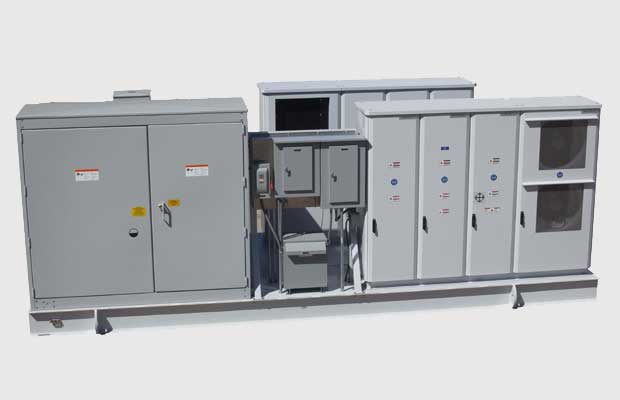 DEWA’s solar project is considered a breakthrough for the solar industry, as the DEWA power purchase contract with ACWA Power had been signed at one of the lowest prices globally of 5.84 US cents/watt without subsidies, making solar power much more competitive compared to other energy sources.

DEWA released a request for the Expression of Interest (EOI) for the 800MW third phase of the solar park on 8 September 2015 and received 95 EOI responses from international solar organizations between 8—29 September 2015. DEWA requested companies submit their requests for qualification before November 2015. This was followed by a Request for Proposals (RFP) to qualified bidders on 28 December 2015.

GE has partnered with Spanish engineering, procurement and construction company TSK to arrange the shipments of the central inverters, with delivery expected to start in the summer. GE will supply outdoor solar SKIDs to TSK to be installed at the DEWA site, with GE’s scope of work including LV5 Series inverters, transformers and switchgears.

GE’s solutions have been designed for performance in harsh desert conditions. The ccompany in a statement said its liquid-cooled inverters are rated for outdoor use and have been conceived to deliver in the harshest of conditions imaginable.

Dalya Al Muthanna, president & CEO, GE Gulf, said, “We’re extremely proud to partner with DEWA and TSK on this groundbreaking solar project. Their trust in our technology for their utility-scale project adds weight to the trust shown by various industry players in GE’s solar offerings. GE is committed to supporting the UAE’s sustainable energy strategy to provide clean power for generations to come, and this project marks an important proof point for that.”

Hani Majzoub, renewables sales leader for the Middle East, North Africa and Turkey for GE’s Power Conversion business, added, “The Middle East is one of the most promising solar markets in the world, and our commitment to providing sustainable power for our region is highlighted through this project. We will continue to support utilities in the region with innovative technology such as our LV5 Series 1,500V inverters, which provide up to 3 percent cost savings in both CAPEX and OPEX. In addition to technology innovation, GE can also provide financing, long-term service and digital solutions to help enable efficient solar farms.”

Dubai is boosting solar generating capacity to meet the growing demand for electricity. The emirate aims to get 7 percent of its power from clean energy sources by 2020. Dubai currently has 13 MW in operation at the solar park.