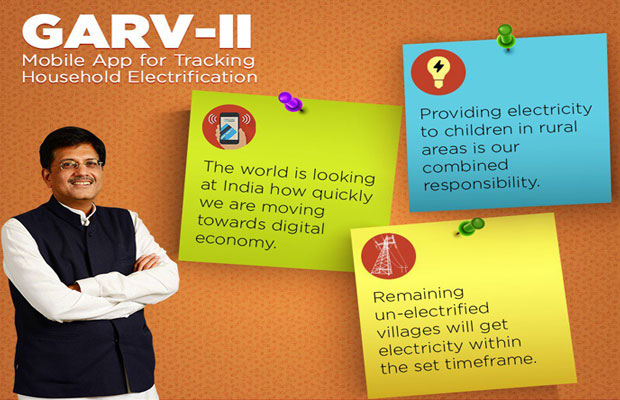 Union Minister of State for Power, Coal, New & Renewable Energy and Mines, Piyush Goyal on Tuesday launched the ‘GARV–II’ App, as the next step in Government of India’s aim to provide access to electricity to all households in the country. The ministry notes that  under this module, village–wise and habitation–wise base line data on household electrification for all States has been incorporated.

Explaining the features of the ‘GARV-II’ app, Goyal said that the data in respect of about 6 lakh villages, with more than 15 lakh habitations having 17 crore people, has been mapped for tracking progress on household electrification in each of the habitations of these villages, which is a remarkable progress over the previous GARV App. In the earlier version of the ‘GARV’ App, launched in October 2015 for the effective and efficient monitoring of village electrification programme, the data of only 18,452 un-electrified villages had been mapped and a 12-stage milestone-based monitoring mechanism was put in place.

The Minister informed that the status of village–wise works sanctioned under the Deen DayalUpadhyaya Gram Jyoti Yojana (DDUGJY) and release of funds to the States for these projects has also been mapped in ‘GARV-II’ to monitor progress of works in each village.  The progress is required to be updated by the implementing agencies of the States on day to day basis. All data would be made available in public domain to ensure transparency, enhance accountability of various stakeholders and facilitate view of near real time progress.

Goyal further stated that this app is an important part of the ‘Digital India Initiative’ of Government of India and will contribute in further development of the villages. In order to bring more transparency, the Minister asked the Power Ministry officials to place more details regarding discoms, tenders and contracts in public domain.

For places, where internet facilities are not available, Goyal suggested to publish information regarding rural electrification projects like contractor’s name, amount sanctioned by the Government, deadline of the project etc. to be put on boards on the working sites in villages. This will help people in better monitoring of Government’s work, he added.

Goyal urged State governments to determine an average price for electricity connections for APL (Above Poverty Line) families across the State so that they can be given electricity connections through the option of paying by easy monthly installments. The Minister said that the Government aims to achieve ‘24×7 Power for All’ and does not distinguish between BPL and APL households.

The Minister also interacted with State Power Secretaries on the occasion, several Grameen Vidyut Abhiyanta (GVAs) also shared their experiences of working in inaccessible and hostile areas to achieve electrification of every rural household. The Minister congratulated them for their immense dedication and zeal in making ‘24×7 Power for all’ a reality.

During the event, Goyal unveiled the Citizen Engagement Window ‘SAMVAD’ which has been created to enhance participation of public at large. The feedback and suggestions from the people would be automatically forwarded to the concerned Managing Director(s) and Superintending Engineer(s) of DISCOMs through SMS & e-mail on their dashboard for online monitoring and further action.

The Minister presented awards to the best performing GVAs as well as the Digital India Award 2016 to GARV for featuring in the Top 3 best Apps that have played a pioneering role in bringing Good Governance in the country.