Only seven days are left for the Gandhi Global Solar Yatra in which one million students from all over the world will celebrate Gandhiji’s birthday and celebrate it as the International day of non-violence towards the environment. 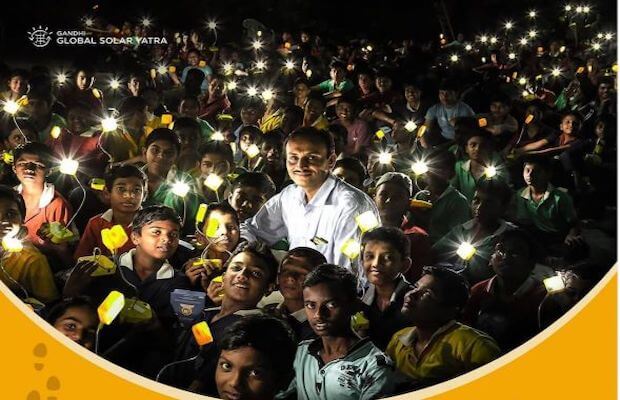 After its thunderous success in 2018, the Gandhi Global solar yatra is reaching its culmination. To mark the 150th birth anniversary of Mahatma Gandhi, about one million student solar ambassadors will assemble with their solar study lamps in a grand ceremony on Oct. 2.

The Gandhi Global Solar Yatra or GGSY was kickstarted by Professor Chetan Singh Solanki of IIT-Bombay on Dec. 25, 2018, from Sabarmati Ashram in Gujarat. Now, the GGSY plans to give more than 10 lakh students hands-on training in solar lamp assembly on October 2 which will mark the culmination of this yatra. A similar workshop was conducted last year where 1.30 Lakh students across India had participated.

“Taking Solar Student Workshop 2018 a notch above, Student Solar Ambassador Workshop 2019 has been planned on a much grander scale, with SSA going International this time. Over 80 countries would be joining hands on October 2, 2019, to celebrate the 150th Birth Anniversary of father of the Nation – Mahatma Gandhi. The SSA 2019 is a part of the Gandhi Global Solar Yatra wherein more than 1 Million students will get hands-on training in the assembly of solar study lamps. Come let us Light Solar Lamps, Adopt the Solar Energy, Surrender of grid electricity, practice non-violence towards nature and become self-reliant in Energy. Be a Solar Ambassador to join the BIG Movement! Be the CHANGE yourself!”—Gandhi Global Solar Yatra.

This one-day event will be conducted on the same day in nearly 180 countries especially in the countries of South Asia, Africa, and Latin America which face a lack of access to energy. According to GGSY, this event will be held on Oct. 2 to celebrate the Gandhian principles of self-sufficiency. This day will also be celebrated as the International Day of Non-Violence towards Environment.

More than 4,00,000 students have already registered with the event and more are joining in. The aim of this year’s global solar yatra is to sensitize over one million students towards adverse effects of climate change and make them future propagators of renewable energy. This is to be done by creating Global Student Solar Ambassadors all over the world.

You can become a part of this event by following simple steps: